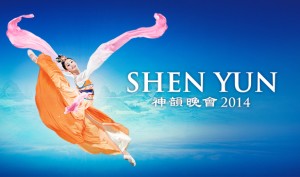 The Shen Yun dancers came to Louisville this weekend, and we attended the matinee show this afternoon.  While at a home show a couple of months ago, we were approached by some Shen Yun volunteers selling tickets.  They had the best available tickets right there in their hands.  “Such a deal”, I thought, because the tickets are not cheap, and this way we got the best possible seats.

The program consisted of a number of very short pieces, each containing a large number of dancers.  The format was referred to as “classical Chinese dance”, although I think most of us Westerners would call it folk dancing.  They do not go en pointe.  The orchestra, though small, was excellent.

The Masters of Ceremonies point out that for followers of Falun Dafa performing these dances is prohibited in China, and a couple of the dances demonstrated this oppression.

During intermission, while his wife was off at the restroom, a man behind me was asking his seat neighbors for news on the University of Kentucky basketball game this afternoon.  “I’m guessing this performance was not your idea,” one of them said, and he replied “No, today is my forty-fifth wedding anniversary, so I couldn’t get out of this, but I didn’t know when I bought the tickets that UK would be playing this afternoon.”

My favorite piece was “Ladies of the Tang Palace”, which featured dancers attired like the one in the picture above.  There was a selection from “Journey to the West”, featuring the Monkey King, Sand Monk, Pigsy, a Toad Monster, the Goddess of the Moon, and the Jade Rabbit pounding with its mortar and pestle.  (The Jade Rabbit, shown at right, was also the name of the recent Chinese lunar rover).