Did LBJ really say this?

Maybe yes, maybe no. Bill Moyers claims he did.

If you Google it, you will likely find two types of results: those that use the quote without citation, and those that say it’s a myth.

Some of those who claim it’s a myth will say that attributing the quote to Bill Moyers is also false.

I went to the library and checked out Bill Moyer’s book.

On page 167: I asked him what was troubling him. “I think we just delivered the South to the Republican party for a long time to come,” he said.

So I don’t know if Lyndon actually said it, but Bill Moyers was there, and he tells us Lyndon did.

My wife says I have too much time on my hands, but I say this is the only way we will save our country from dezinformatsiya.

Let the squirrels carve your Halloween pumpkin. The cat will enjoy it, too:

Posted in News from Louisville, Outdoors | Comments Off on Squirrels. Pumpkins. Cats.

The 2019 Bowman Festival of airplanes. And a bunch of other stuff these days to get more people in, but I’m really only interested in the airplanes.

There was a classic Bell 47 flying all day.

The Bell 47 was featured in the TV show Whirlybirds, which, along with Bullwinkle, was my favorite TV show when I was little.

There were lots of what I call Real Airplanes that look like airplanes are supposed to look .

Including this C-47 (aka DC-3). The pilot was sitting inside and I was able to discuss with him some of the handling issues that I have been having with the DC-3 in Flight Simulator. You can learn a lot from the man who flies one.

You could walk through this old bomber from nose to tail. The bomb bay was a little tight for me. And fortunately they had a ladder (above) so you did not have to enter Gregory Peck-style.

Here’s the instrument cluster from a homemade plane.

Attitude indicator? Just look at the horizon. If you can’t see the horizon, you shouldn’t be up in this plane in the first place.

Vertical Speed Indicator? Just look at how fast the ground is going away (or coming up). If you can’t see the ground, well.

ADF, VOR, COM? Radios? You don’t need no stinkin’ radio. Actually, I did speak with the owner and he said there is one hidden out of sight so that he can use controlled airspace when necessary. Like when flying to the airshow!

And note the padded dashboard for those less-than-perfect landings.

Another beautifully restored old plane, this one came down from Chicago. The owner said he’d be taking it back early today, as there was a rainy cold front moving in.

The Experimental Aircraft Association were there with some of their very dangerous-looking homebuilt airplanes. One tiny one was powered by this cute three cylinder radial:

There were several other craft flying around (and rattling the windows in our house), including a B-25, an incredibly loud TBM Avenger, and a P-51.

Posted in Uncategorized | Comments Off on Airplanes!

Our annual trip to the Kentucky State Fair (We went on Senior Day, and got in free). It was hot, as usual. There were very few parking lot shuttles; nowhere near enough for the demand on such a day. There used to be plenty of the tractor-drawn wagons that one could ride. I think they may have privatized the service.

This year they had several large fiberglass animals at the entrance. To get you in the mood, I suppose.

CVH always looks forward to her State Fair Corn Dog each year. She arrived just as they started frying, and got a fresh hand dipped dog (not a Sysco dog from Houston). This year I refrained from eating an elephant ear or a large fried whatever and I felt much better.

The State Police had an small helicopter that you could get inside. I thought it was so cool to see the actual implementation of what I was familiar with only through Flight Simulator. Unfortunately, I couldn’t get a good photo of the copter, but here is CVH posing as a pilot.

We watched a magician escape from a locked box. He had a young female assistant in a sparkly outfit (some things never change). It wasn’t too hard to figure out how the magic box worked, but it was amazing that a guy his age could do it so quickly.

Last year, for the first time, CVH entered the culinary competition. She baked a pound cake.

It did not win an award.

When we went to the displays, we studied the award winners very carefully to see what it was the judges were looking for. All of the top pound cakes had a much tighter crumb than CVH’s, and their crust was very light (her cake had a darker crust). So this year she bought a silver flute pan instead of the dark one she used last year, and she strove for a denser cake.

Imagine our shock when we saw this year’s winning cake. It had not been cooked in a flute pan at all, was glazed (in clear violation of the standard), and had a nearly burnt crust. Unfair at the fair!

However, we regained our composure and enjoyed the rest of the day.

Finally, there was the always popular baby duck exhibit.

Posted in News from Louisville | Comments Off on We Wuz Robbed!

We took a quick trip up to Chicago this weekend. Summertime is a nice time to visit Chicago, although you can get a little sweaty.

I took the time to visit some parts of town that I hadn’t seen before. In Rogers Park, I saw this nice Frank Lloyd Wright house.

There was this rabbit thing in that front yard, above. I thought, “What a strange decoration to put in front of a Wright house,” and then it wiggled its nose at me. “You’re a real rabbit!” I exclaimed. A rabbit. In the city. How strange.

I walked on down the block, and suddenly another rabbit hopped across the sidewalk in front of me (this was along a busy thoroughfare, mind you). A postal person was coming the other way and I stopped him to ask if he usually saw rabbits on his rounds, because I had just seen two on this block.

“I think someone around here feeds them,” he said. “You’re not going crazy.” Well, that was a close call with a Silver Alert.

Around lunchtime it started to rain, so CVH and I ducked into a Pakistani restaurant in a little strip center. It certainly did not look like much, but any port in a storm. Shan Restaurant, since 1992. Turns out they have a wide menu:

The food was quite good, but very hot. You will need an order of rice to go with the dal or okra. Once mixed with rice, however, it is perfect.

That evening we needed to go from our hotel on the West Loop over to another hotel over by Michigan and the river. Since the weather was nice, we decided to try the water taxi.

The water taxi works well; it’s about as fast as ground transportation during rush hour, and you get a good scenic tour, to boot.

When we got home, the air conditioner was broken.

Posted in Vacation | Comments Off on Chicago Summertime

CVH and I celebrated our nth anniversary this weekend.

First, we checked into a local hotel: 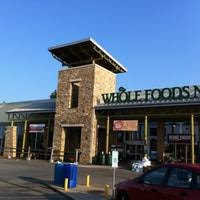 There was a Whole Foods nearby, where we discovered that for $5 to $10 you can get a healthy, tasty meal. Considering that you would spend that amount for crap from some fast-food joint, it makes Whole Foods a bargain, and I never thought I’d say those words.

After eating lunch there, we picked up some items for that evening’s dinner.

The shopping mall was also right around the corner. 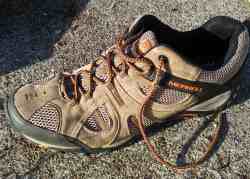 What I should have worn

The mall still appears to be a going concern, although today’s tenant stores suggest that a lower-profit margin market is moving in, and I suspect that means lower rents. We shopped the clearance rack at JC Penney’s, and bought chocolate and candy at the candy store. The record store is still there, although much smaller (a discount shoe store is in its old location); CVH got a Temptations and a Diana Ross CD. We needed a entertainment option for the evening, and I found a DVD of Scorsese’s The Aviator. One of my favorite movies; I got it for $3, a sacrilege.

The next morning, we walked across the street to the fancy gym and relaxed in the hot tub before coming home. Do I know how to show a girl a good time, or what?

Posted in News from Louisville, Vacation | Comments Off on Happy Anniversary

Along with a bunch of other geezers, we went to the Abbey Road On The River Beatles festival today.

We had to walk across the long bridge to get there. The festival used to be held on the Louisville side of the river, but then there was some sort of dispute between the organizers and the host hotel, so the organizers moved to the Indiana side. CVH told me that things must be better for them there, as she read they signed a contract to host the festival there for the next five years. I said “That ought to carry them through to where we all start dying off, or they move this thing to the nursing home.”

We saw several great tribute bands, including The Starclubbers, Itchycoo Park, Classicstone, Beatline, George Harry’s Son, and LSB Experience. We sang along to “I Want To Hold Your Hand”, “Bésame Mucho”, “Piggies”, “It’s All So Beautiful”, and other hits. Yes, that last was Small Faces, not The Beatles, but they have dozens of bands over five days, so they have to stretch things out a little.

At one point the skies opened and the rain poured, causing the festival to shut down. I started the Woodstock “No rain!” chant, but for some reason, nobody picked up on it. Strange.

That guy in the front was really tall.

Posted in News from Louisville | Comments Off on Beatlemania

We stopped at this local Bowling Green institution for lunch. All the food was very fresh, and they had a good selection of ice cream, which I took advantage of:

As you can see from that paunch, I regularly partake of ice cream. I also purchased a nice souvenir mug:

I particularly liked it because it’s the color of a carton of Blue Bell. Perfect for sipping coffee. Or you could eat ice cream out of it.

Posted in Food & Eats, News from Louisville | Comments Off on Chaney’s Dairy Barn

Our son got married today.

Posted in News from Louisville | Comments Off on The Wedding