Cheap Fun with Kid in Louisville

Today was a low-cost, but fun-filled day of activities.  There is no such thing as a free lunch; we had to burn some gas driving around, and some people would say our consequent carbon footprint was yet another cost, but still we did the day on the cheap.

First stop was Feeders Supply.  A great place for some free entertainment (well, we did buy some cat food).  The Humane Society maintains a satellite facility there, so GC got to see the dogs and cats and kittens available for adoption.  And Feeders had bunny rabbits and birds and gerbils and hamsters and lizards and all kinds of fish for sale.  The hamsters ran around on their little wheel, and the lizards ate crickets.  There was also a lady in the self-serve pet wash grooming her dog.  All in all, at least a half hour of entertainment.

Then we went to Locust Grove, the historical mansion of one of the early families of Louisville.  They had just recently finished a major renovation and had a free day today.  There were reenactors playing various characters from early eighteenth century Louisville and the renovation of the mansion was stunning.  They have done so much with the site since we moved here four years ago.  All the ladies playing period characters wore long dresses and held fancy fans.  GC was taken by the fans, and we got one at the gift shop. 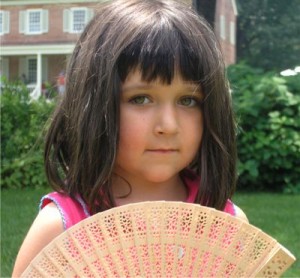 We ended up at the public library (always free), and the Louisville Beekeepers Association was there with a substantial exhibit.  GC got to see the Queen Bee, which thrilled her for some reason.  We also got to play on the library computers, get a summer reading club bag, and check out some videos.

This entry was posted in History, News from Louisville. Bookmark the permalink.