I meet a celebrity

This last Saturday was the Kentucky Humane Society’s annual outdoor fundraiser, the “Waggin’ Trail”. Donors brought out their dogs for laps around the park. It turned out to be a hot day with bright sun, and I carried many gallons of water for hundreds of these thirsty dogs. 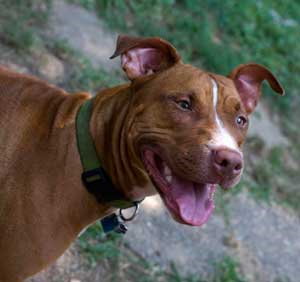 In addition to the walk, an owner-dog look-alike contest, agility demo, and other activities, various other animal welfare organizations were in attendance. One of them was “Saving Sunny”, a pit bull rescue organization named after a dog who was thrown off the Clark Memorial Bridge in downtown Louisville in July 2009. I was down there at the park that afternoon, but fortunately did not witness the horrific incident. Kelsey, a server at a waterfront restaurant, took in the dog and named him Sunny. Shortly thereafter, Kelsey’s landlord told her “no pets” and said that the dog would have to go. This was widely reported in the Louisville media and the landlord backed down.

So I got to meet Kelsey and pet Sunny.

This entry was posted in Uncategorized. Bookmark the permalink.