The End of the World?

News item: The Earth has had two near-misses with large asteroids already this month.

Add to this the idea that the Mayans predicted the world will end on 21 December 2012 when a “planet” strikes the Earth, and, well, why not be there for a front-row (or at least balcony) seat?

So we landed in Costa Rica today for a two week vacation.

Our sweet neighbor dropped us off at the airport this morning at 5:30 a.m. (We have really nice neighbors; in addition to this favor, they are also taking care of our cats, while hosting another friend’s puppy for the holidays).  We had a layover in Charlotte, and ate breakfast there at Beaudevin, a real restaurant in the middle of the airport.  I can highly recommend Beaudevin if you’re in CLT and need a meal.  It’s in the main atrium area.

I had some fun with CVH after breakfast: she asked which concourse our Costa Rica flight was leaving from.

She hates that sort of thing.

After breakfast, it was off to Costa Rica.  On the way there, we flew over Cuba.  I was able to see the island from the airplane.  Not a particularly exciting sight, I suppose, but it is intriguing to someone of my generation how such an unprepossessing spit of sand has caused so much controversy in the last sixty years.

We got through immigration and customs at the not-over-air-conditioned San José airport without problem and taxied to our hotel, the Barceló Palacio. 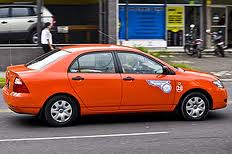 We had a very pleasant taxi driver on the way in from the airport.  We chatted about the plants and trees that we saw along the way.  It was such an unusual pleasure to get a airport taxi driver that could speak the language and knew where he was going.  (I’ll never forget the time I returned home to Houston and had to give the driver directions on how to get out of the airport.)  However, despite all the many signs in the airport that indicated that the official orange airport taxis all take VISA, our driver would only take cash.  We found this aversion to credit cards to be common throughout the country; they haven’t yet accepted the theory that the fees are made up for by increased volume.

The view from our room was just paradisaical: 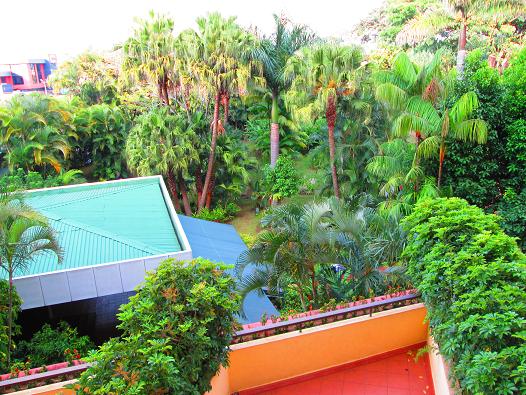 After dinner, when we returned to our hotel room, I told CVH that I’d try to get a nice telenovela on the TV so that she could practice her Spanish.  She said no, she didn’t really care for telenovelas, but if we could get Law & Order in Spanish, that would be a help (I think she has seen every Law & Order episode twice).  Well, I couldn’t quite get that, but we did get Law & Order in English with Spanish subtitles, which she got a big kick out of.  There was also a big fireworks display going on over at the giant soccer stadium.  Apparently people everywhere like fireworks, even in a country so pacifist that it doesn’t have an army.