The Train to Salvation 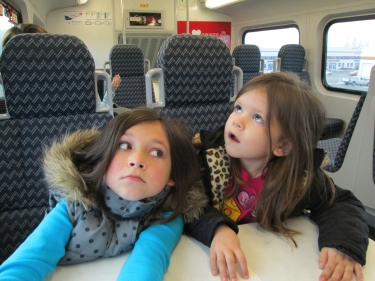 Today we took the commuter train downtown.  I think the grandchildren had been on trains before, but this may be the first train ride that they will be old enough to remember.  Indeed, at times they even appeared astounded.

We got off at the big shopping mall downtown – the one with the fancy fountain, the retractable roof, and the trout swimming in the middle.  We shopped for a while, and then went to the food court for lunch.  This video of activity in the food court may demonstrate a contributing factor in why American children cannot behave themselves in public, if this is how they’re allowed to act when taken out to eat. Just sayin’. 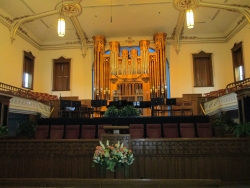 The first Mormon house of worship in Utah

Once we were through with lunch, we walked across the street for a tour of the Mormon temple center.  We had two very personable volunteer missionaries lead us around, one from Hong Kong and one from New Zealand.  At one point, the Kiwi asked me about Kentucky.  I told her it was very green, not like Utah.  She said that was how NZ was, too.  She expressed some concern about how much weight she might gain while here in the States because there was so much food.  “It’s so cheap!” she said.  “There’s a reason for that,” my wife and I replied in unison. 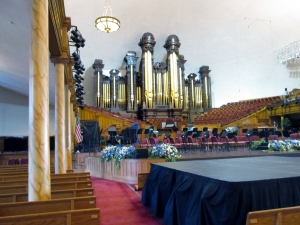 Where the choir sings

They showed us the original church and where the Mormon Tabernacle Choir sings, as well as paintings, sculpture, and dioramas in the visitor center. 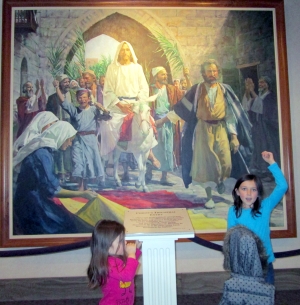 Jesus and the grandchildren

There are many depictions of events from the Old and New Testaments, including the triumphant entrance of Jesus into Jerusalem.

They talked about how important their faith was to them. Then, after a quick huddle, they asked us if we would like to see a short video.  We said fine, and they led us into a small auditorium where we watched a presentation on how important family is to Mormons.  As we were walking out of the visitor center, I noticed that we passed several other little auditoriums like the one we were in.  I wondered if they had different presentations for different groups, and with our gathering of four generations together, they thought the family message would particularly resonate with us.  Was there a different video for seniors groups? Teenagers? Young couples? Catholics? I wonder. 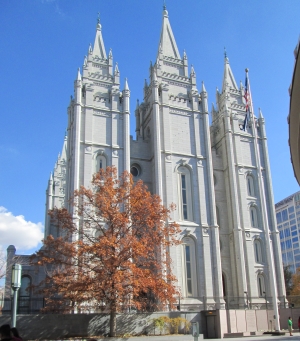 The very next day, my wife was checking the voicemail on our home phone, and there was a message from someone at the local Mormon temple in Louisville.  Now that’s how to run an evangelism organization.  I was impressed.

We took the train back to the park and ride, and then stopped at the grocery on the way home for some dinner ingredients.  I was surprised to see that Graeter’s, a premium ice cream made in Louisville (and by premium, I mean it sells for about thirty dollars a gallon in the grocery store) was available, but Blue Bell was not.  How strange. 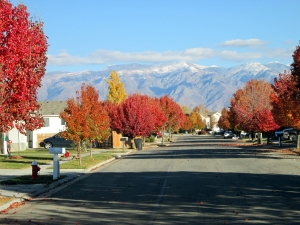 Dead ends at the mountain

By the way, when you drive into the kids’ subdivision, it looks like it bumps right up against the mountains.

Then that night we unwrapped an early birthday present for GC2, a toy train. It was a bit frustrating at first to setup, because grandpa has trouble seeing up close since his eye surgery, but once I got it running the kids had a great time with it. I’m not sure their father was as thrilled with it sprawling across the living room floor, though.