The Kentucky Derby Marathon was held today, and our company fielded a small team of runners and walkers.  I was a member of the team, but I wasn’t perambulating the course – I was one of the support team, cheering on the others.  I stood by the course ringing a cowbell for an hour and a half (I wore earplugs).

The morning started out cold and rainy.  I went to the designated spot where the race organizers had said that there would be bleachers and noisemakers and maybe even snacks.  But when I arrived, there were no bleachers or noisemakers and certainly no snacks.  And there were only about six of us.

The sun finally came out and it turned into a pretty, if humid, morning for running.  So I walked down further toward where the runners were coming from and was amazed at what fifteen thousand people  coming down Fourth Street looked like.  I was reminded of the old remark about if all the Chinese started walking by four abreast, they would never stop coming. 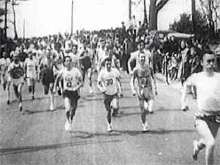 Not the Kentucky Derby Marathon

There weren’t many people in costume; apparently that’s not as popular as it used to be or the rain discouraged the use of such elaborations.  There was a cute SpongeBob SquarePants, a couple of Elvises, a race horse (last year’s Derby winner Mine That Bird), and what I think was a nineteenth century riverboat gambler or gentleman – it was hard to tell which.

At my corner there was also a guy who showed up in his car and argued with the policeman about letting him drive across the course.  I wonder why he engaged in such counterproductive behaviour; the cop a couple of blocks down was letting people across, but once he decided to argue, well, that was it for him.

Our team leaders both finished the half-marathon in under two hours, and one team member came in 23rd in their division!  I rang them on, as well as the rest of our team.  Eventually the last walker of our team came by, and I holstered my cowbell.