Last Saturday, Grandchild 1’s parents dropped her off for the summer.  It has been a whirlwind of activity since, and promises to be for the next couple of months!

Sunday, while the four females (grandma, mom, GC1, & GC2) slept in, GC’s dad and I went off on a three and a half hour bicycle ride.  We returned only to find that the females had since arisen and decided that we were going to spend the rest of the day at Huber’s.  “Huber’s” is considered an annual rite for the locals; they make a pilgrimage there with the family.  GC1 rode a tractor-pulled trailer out into the strawberry fields and picked strawberries (I have mentioned before that the Hubers are geniuses at getting city folk to do things for free that they used to have pay hired help to accomplish).  We went and looked at the rabbit family.  We slid down the slide.  We fed the goats corn (they have an interesting setup where you load corn kernels into a cup and then crank a wheel which runs carries the cup to a jungle-gym-like structure that the goats have climbed to the top of and are awaiting the arrival of your corn).  We put bits of hot dog on fishing hooks and caught a small catfish in their pond.  That was just the first Huber’s. 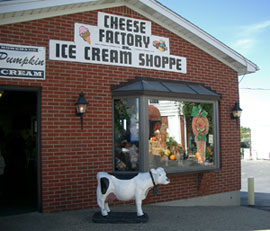 Then we went on to the second Huber’s, where we visited the ice cream shop (shown), the winery, and the bakery (I got a rhubarb pie).  Then it was off to the kiddie park.  Once again, GC1 passed up the calf, the pony, and the sheep to get to the goats and feed them corn.  She seems to have a thing for goats.  We gobbled at the turkeys, listened to the peacocks screech, slid down another slide and then plunged into the bamboo maze.

I really enjoyed the bamboo maze.  GC1 and I got lost, causing grandma some concern, but we eventually found our way into the center of the maze where the flag was.  The rest of the family stood outside the maze and yelled at us to get out of it, which of course was not of much help at all.  Eventually dad found us and led us to the exit.  I found it great fun.  The others were rather less enthused. 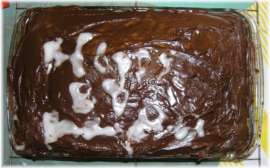 Tuesday grandma and GC baked a chocolate cake together – from scratch!  Nothing out of a box, not even the frosting.  It was absolutely delicious.

Wednesday afternoon we headed downtown to the sprayground by the river.  Unfortunately I could not remember exactly which parking lot was the correct one.  I picked the wrong one.  After walking around in the hot (it was nearly ninety) sun for about fifteen minutes, GC1 was not a happy camper.  However, we got back in the truck, found the right lot, and as soon as she saw the water shooting up and all the little kids running around in swimsuits, it was declared “the best day ever!”  Spraygrounds are really a pretty neat idea; I don’t think teenagers find them much fun, so it’s all little kids, it’s reasonably easy to keep an eye on yours, and they save tax money – no lifeguards and the liability insurance has got to be cheaper.  The one downtown is particularly well-architected. 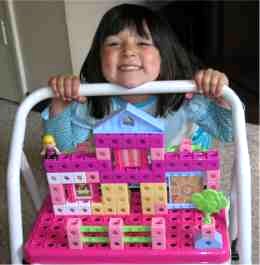 Backyard view with fence and tree

Today we built a house with her building blocks.  It turned out very nicely, with a columned portico, outdoor accent lights, and a classical pediment.  Much cooler than Lincoln Logs.

Once that project was complete, it was off to the local library. GC played with the wooden train set there for a while until a slightly older child came in and started surfing the internet. At that point the wooden train could simply not compete with www.barbie.com.

Splashing at the sprayground

After the library it was off to the sprayground again, but this time the smaller one in our neighborhood.