She’s not a little old lady in Dubuque 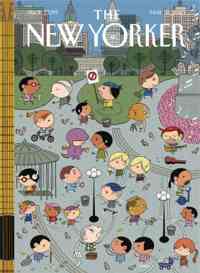 GC and I were sitting at the dining table.  The day’s mail had recently arrived, including this week’s edition of The New Yorker.  The cover of the magazine featured a cartoon showing various characters wandering through Union Square.  We discussed what each character might be doing, counted the number of boys and girls and birds; generally, the sort of thing you’d do with a four-year old.  Grandma entered the room.

“It figures,” she said, “Her father said this would probably happen.”

“He figured you’d be reading the New Yorker to her.”