Grandma, grandpa, and GC went to the Louisville Science Center today, or as GC likes to refer to it, The Eyeball Museum (a reference to part of the museum’s logo).  We visited the robot exhibit, saw examples of Kentucky wildlife habitats, played macrophages and T-cells attempting to kill invading bacteria, worked an air compressor, and many other activities.  At the emergency room, GC donned a doctor’s cape, inspected grandpa’s x-rays, and to everyone’s relief, pronounced him OK.  We wandered around about three hours and there are still parts of the museum that we haven’t seen. 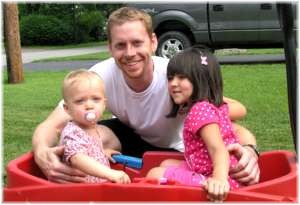 GC1 and the neighbors

We left the museum for lunch and went down the road to a Louisville icon, the Kingfish.  The first Kingfish restuarant opened in 1948; we went to the 1976 version, which is right on the Ohio River.  We saw humongous (according to the GC) barges, sailboats, little boats, and a police boat go by while we were eating.

When we returned home, the neighbor was giving his young daughter a wagon ride, and offered GC one, too.  A wagon ride is always a good thing. 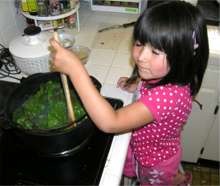 Helping in the kitchen

For dinner, grandpa grilled Kentucky brats, buffalo steak, pork chops and corn-on-the-cob.  GC helped pick Swiss Chard from the garden and cook it up on the stove.