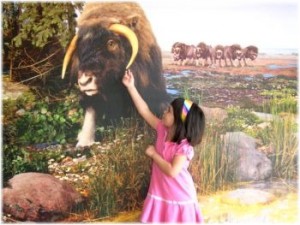 This morning we visited Big Bone Lick State Park.  In Texas, the refrain is “everything is bigger in Texas”.  It seems that in Kentucky the refrain is “it started/happened here first”; my wife and I see this attitude all the time on Kentucky Life, and joke about it regularly.  So when I pulled into the entrance of Big Bone Lick State Park, and saw that the sign out front proclaimed it to be “the birthplace of American Paleontology”, I thought Here We Go Again.  But, as usual, there is some evidence to lend credence to this claim.  Turns out that in pre-Revolutionary times, both Benjamin Franklin and Thomas Jefferson studied prehistoric bone samples from this area. 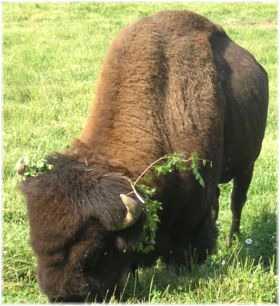 If you get to the park first thing in the morning, you can get a good view of the bison herd.  The park ranger told us that later on in the day the bison move way up the hill and are much harder to see.  But the buffalo are fed early in the morning and you can get quite close to them; we were close enough to hear them chewing.  There were even two baby buffalo, which, of course, the grandchild found absolutely enchanting.  And she was intrigued by the animal bones and teeth and Indian artifacts in the museum, surprisingly so; or at least I thought for a four year old. 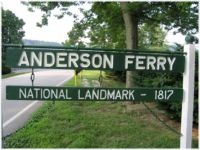 That evening after dinner, the two of us were looking for something to do.  There was a ferry across the Ohio River nearby that my wife and I had seen featured on Kentucky Life. So I decided to take GC1 down to watch it go back and forth.

The road to the ferry was the steepest and narrowest road I had driven outside of the Rocky Mountains.  The speed limit sign said 35, which was hilarious, as even in the BMW I never made it over 15 and that was on the few straight stretches.  The car was angled down so acutely that the oil level warning came on (don’t they have mountains in Germany?  You would think that they had allowed for a situation like this). 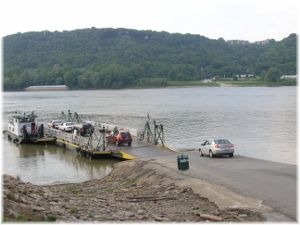 We eventually arrived at the riverbank and watched the cars get on, go across, and get off.  When the ferry started back, I asked the GC if she wanted to ride on the boat.  “No, I’m scared,” she said, and I said that was OK.  But by the time the ferry bumped up to the shoreline she had changed her mind and we walked down behind the cars and onto the ferry.

The usual crossing fee for a car was $4.  But we were on foot.  The old man collecting money looked at us for a moment, then asked if we wanted a round trip.  I said Yes, and he said One Dollar.  Such a deal.

Then, of course, we had to go back up the same road on the same hill to get back to the hotel.  It’s a good thing that grandma did not go along with us, as she does not care for steep roads, narrow roads, nor ferries for that matter, in the least.