The fifth of July, and I thought it would be a good day to go visit the Lincoln commemorative sites in Kentucky. 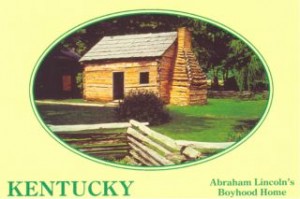 First, we stopped at the Lincoln boyhood farm at Knob Creek.  Lincoln lived here from the time he was two until about seven.  The land has been undeveloped over the last two hundred years, so you see it pretty much just as Lincoln saw it as a young boy.  They’ve added a small log cabin which the rangers told us originally belonged to a friend of Lincoln’s and is contemporary with the time he was there.  Although the home appears very small and humble to us, we later learned that Abe’s father was (according to the tax rolls) in the top 20% of wealth-holders in the county.

From there we went to Hodgenville, which bills itself as the Birthplace of Lincoln.  There is a large statue of the man in the downtown town square which we walked around and then we headed down the road for lunch.  We stopped at Ruthie’s Lincoln Freeze, a local diner that has been a local icon for many, many years.  The menu listed the usual cuisine – chicken nuggets, fish sandwich, and something called a Chuckwagon sandwich.  I inquired as to what a “Chuckwagon” was.  The waitress replied that it was a breaded patty.  Fried.  “Beef, I think”.  I chose the “Lincoln Burger”, instead.

Finally we ended up at the commemorative birthplace site.  Lincoln’s father had come through the Cumberland Gap to what was then the frontier, worked as a carpenter and odd-job man, and was eventually able to buy the Sinking Spring farm (so named for the natural sinkhole spring that provided water).  Abe was born here, and shortly after, his father lost the farm in a title dispute.  (That was when they leased the land at Knob Creek.  When they were about to be evicted from there due to another title dispute, Abe’s father said he’d had enough of that and moved the family to Indiana.) 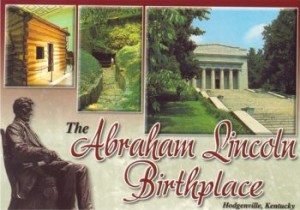 On the centenary of Lincoln’s birth, a memorial was built on the grounds of Sinking Spring. The grounds are beautifully maintained, and the introductory video quite well done.  Alas, the memorial itself was closed for “renovations” (although I heard it was some sort of rodent infestation).  We were able to visit the spring, which was a nice cool break on a hot day. 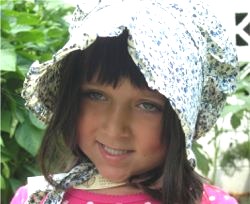 At the gift shop, we did buy the GC a traditional period bonnet to shade her feminine features from the summer sun.