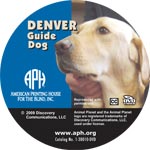 Then this morning, we visited APH and met Denver and his owner in person.  How often do you get to meet a real live Animal Planet star in person?  Or in canine, as the case may be?

We also toured the grounds of Whitehall, an antebellum mansion not far from our house.  The Jefferson County Master Gardeners Association has been working on the gardens for years now, and the results have truly paid off.  One section that the gc and I both had a fondness for was what we called “the bee garden” – a planting of flowers that were obviously appealing to bees. 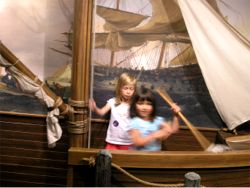 After those diversions, we went over to the Speed Art Museum.  Thanks to a reading challenge at the Louisville Free Public Library that the GC had successfully completed, we got into the children’s art area for free (a $15 value!).  There is a wide variety of activities to stimulate the young imagination there, from making rubbings of African totems to dressing up as a seventeenth-century Dutch merchant and provisioning a sailing ship. 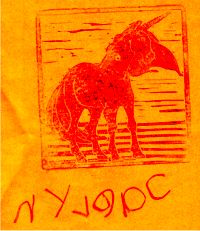 Kids can paint, draw, play with a variety of architectural building blocks, and since one of the current museum exhibits was a set of Andy Warhol prints, make your own print of a mythical creature.  The GC chose this unicorn. (The mirror-writing is original.) 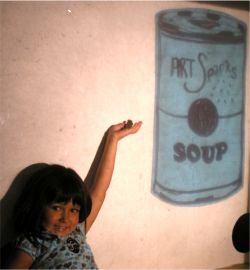 She also posed in front of this icon. 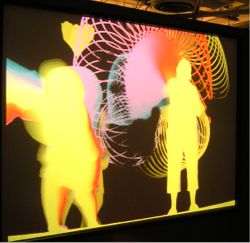 But what was probably the biggest hit was a room which made strobe-light silhouettes of your body as you moved around.  Here are grandma and GC enjoying themselves.