A Fairs of State 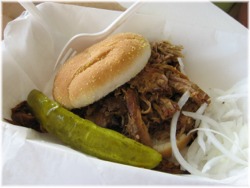 Today was our annual pilgrimage to the Kentucky State Fair, and, as usual, I had more fun than I thought that I would.  We started, as always, at the Kentucky Proud agricultural tent, where we had a hand-dipped corn dog (none of those Sysco corn dogs shipped up from Houston) and this delicious pork sandwich from the Kentucky Pork Producers Association. 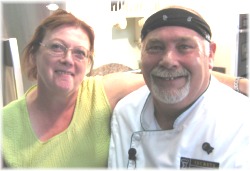 I visited the beekeeping display and met the Kentucky State Apiarist, Phil Craft.  I called him the “King Bee”.  Charlaine’s favorite display is the “Cast Iron Chef” competition, where two local chefs have thirty minutes to prepare a dish with a locally produced cut of beef.  This year’s competition was hosted by Chef Deano, former host of TV’s “Secrets of Louisville Chefs”, so he was right at home in front of the crowd. 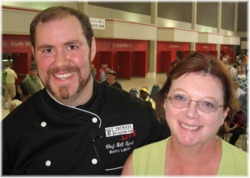 The two competitors were Richard Lowe, a Katrina “refugee” from New Orleans, now at Coach Lamp, and Bill Lynch of Le Relais, a very tasty but rather snooty restaurant in the old airport terminal.  Charlaine got to meet both chefs after the competition and got some tips on cooking with saffron.

And we got to see this year’s “largest watermelon”. 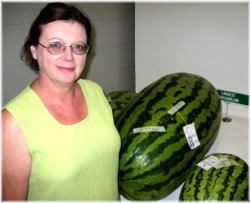 This entry was posted in Food & Eats, News from Louisville. Bookmark the permalink.