After I left the Honey Festival, I decided to head up to Fort Knox to see the tank displays at the Patton Museum.  The wife and I had been there a couple of years back, but she wasn’t so enthralled, and I figured now I could take all the time I wanted.

First, though, I discovered that if you make a wrong turn into the Fort, and then tell the guard that you are lost and looking for the Patton Museum, they will let you turn around and drive past the bullion depository building.  I was surprised that they let you get that close.  They tell you not to stop or take pictures, and since there was an MP truck sitting along the road in front of the depository, I certainly wasn’t going to test their resolve on this matter.  It looks like it does on TV, but somewhat more vulnerable.  I’m sure that’s an illusion, Mr Oddjob. 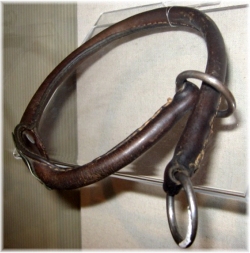 The next turn was the correct one for the museum, but alas, when the Armored moved to Fort Benning, they took their tank display with them.  I did get to see the collar of the General’s beloved pit bull dog, Willie.

This entry was posted in History, News from Louisville. Bookmark the permalink.