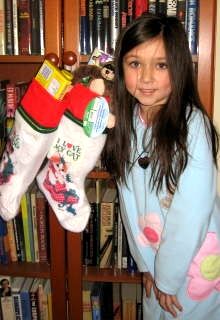 Nothing quite like young children on Christmas morning. The eldest granddaughter (GC1) got up and immediately wanted to know if Santa had eaten the cookies and milk that had been left out for him. Once that fact had been established, then her attention turned to the stockings on the bookcase which had become (magically) filled with treats. Then, clearly, it was time to wake up her parents and get down to the serious work of opening all the presents. Soon there was a pile of boxes and wrapping paper as tall as her stacked up in the living room. Meanwhile, her little sister was having trouble with the concept that some of the presents were for her, while others were destined for other people. But eventually she had enough toys to distract her. 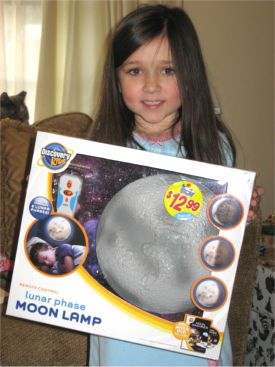 GC1 got this cool moon lamp that casts a dim, some might say moon-like, glow in a dark room and goes through the phases from full to new. I was jealous, but CVH said we were not getting one for the master bedroom. GC1 also received a fashion book; a couple of her creations are shown below.

Then, for the one thousandth time, we were treated to GC1’s favorite Christmas song, “I want a hippopotamus for Christmas”. Eventually GC2 got into the spirit and started dancing about the room, but stopped and protested when she determined that I was recording her. Apparently she has very strong feelings about bootleg videos of her performances.  GC2 protests bootleg videorecording (wmv)

I gave my wife several romantic gifts, including a water filter and a meat grinder:

As well as a toaster.  She was pleased. 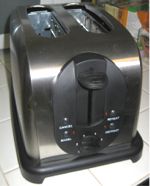 I was blessed  to receive books on CD for my long commute, and a t-shirt with basic Linux commands printed upside down on the front, so that if I get stuck while working on the computer, I only have to look down. Justin said it looked like something from “Big Bang Theory”.