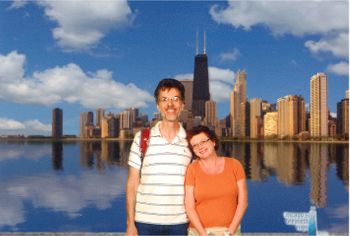 This weekend is Matthew Broderick’s fiftieth birthday, and to celebrate we decided to take a long weekend off and visit downtown Chicago.  Well, actually it was just a coincidence, but it worked out nicely.

It’s cheaper to stay in Chicago during the off season (gee, wonder why) and we made these reservations a while back realizing that we might be trudging through mounds and mounds of dirty snow.  But we figured that there are lots of indoor things to do and see in Chicago, so that was OK.  I had been to Chicago many times as a small boy; my mother was a designer and she made regular trips there to the Merchandise Mart.  I often went along and was dropped off at my grandmother’s.  My grandmother was a true Chicagoan: always had a North Lake Shore drive address and you knew it.

We boarded our Southwest flight right on time.  Their service is still good, but they have switched to a new seat design so as to squeeze in an extra row of passengers, and these new seats are uncomfortable.  I was glad that it was a short flight, and that we landed fifteen minutes early.

Although I’d been to O’Hare more times than I could count, this was my first trip into Midway.  The trip was uneventful, however I should point out that the restrooms at Midway are quite small; prepare to wait in line.

Once refreshed, though, we made the short hike to the Orange Line train.  The nice transit authority people there helped us get three day CTA passes.  Not like the east coast, where they would have pointed to the machine and said “well, get one then.”  In fact, almost everybody was pleasant to us on this trip.

The Orange train took us right to the door of our hotel, the Silversmith.  It seems as if ninety percent of pre-war office buildings in Chicago have been converted to condos or hotels, and this one was no different.  The Silversmith is right downtown in the jewelry district (hence the name).  We got a comfy room (though a bit small), and attentive service for $125 a night (plus Chicago’s confiscatory tourist taxes).  The bed provided a lot of back support, something I often have trouble with at hotels.  A great value, and I would recommend the hotel to any of our friends who don’t need the level of amenities of, say, a Hotel W.

The weather was so nice, sunny and in the seventies, that we decided to walk over to Millennium Park first.  Supposedly, the story behind the park is that Mayor Daley (the younger) was visiting the office of his dentist on Michigan Avenue,  sitting in the chair awaiting a teeth cleaning, and was looking out at the relatively undeveloped park area on the other side of the street.  He thought to himself that something could be put there that would draw more people to downtown.  So he had it built. 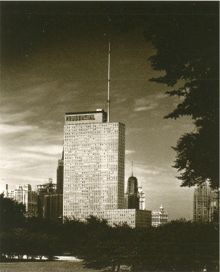 The Pru (as I remember it) 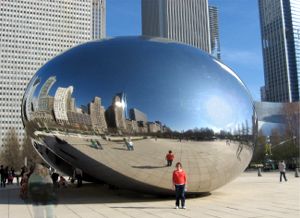 The park now contains a beautiful outdoor theatre, and one of Chicago’s most recognizable landmarks – the Bean.  We took the obligatory tourist photos, and then went to walk over the Frank Gehry pedestrian bridge.  Unfortunately for us, the bridge was closed due to it being Saint Patrick’s Day.  I guess the city officials were afraid that the bridge would be overloaded with too many people trying to see the parade.

And there were definitely too many people trying to see the parade.  You should know that if you visit downtown Chicago on a sunny St Patrick’s Day, you will see literally hundreds of thousands of people, most wearing green, many in various stages of inebriation.  I saw more than one pretty young woman wearing a t-shirt that said “Kiss me, I’m Irish”, but I don’t think they really wanted me to. 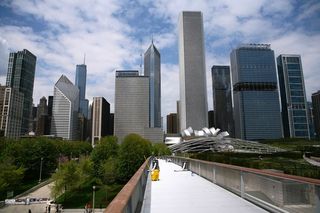 Since we couldn’t walk across the Gehry bridge, we crossed Renzo Piano’s Nichols bridge.  You get a wonderful elevated view of the classic skyscrapers from there.  Note how the Pru is dwarfed today compared to the older picture above. 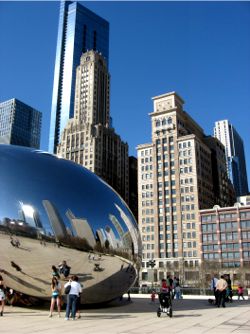 With the American Institute of Architect’s Guide to Chicago in hand, we enumerated the buildings along Michigan Avenue.  We saw and read about the Montgomery Ward building, the People’s Gas Company building, the Britannica Center (home of the encyclopedia), and the Studebaker Building, where they showed off their carriages before they got into automobiles and which we will return to on Monday.

The giant blue glass tower in the adjacent picture was next door to our little hotel, but you didn’t realize it, because the first six floors are hidden behind the facades of the original buildings.  Quite a clever way to hide a 72 story skyscraper. 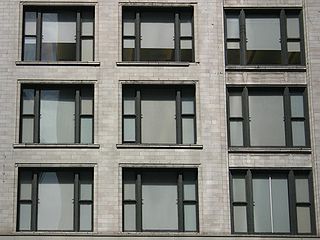 By this time we were getting hungry.  We walked over to Marshall Field’s, now “Macy’s”, although I’m not sure how many old-line Chicagoans have made the shift to the new name yet.  On the inside it still looks much the same as it did fifty years ago, with the tall sky-lit arcades and Tiffany mosaics and beautiful old  elevators.  And you can still eat lunch in the Walnut Room, just as I did fifty years ago and it still looks the same; in fact, we sat next to one of the original “Chicago windows” and looked out at the Reliance Building, one of the first skyscrapers to feature such windows. 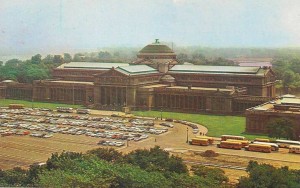 After lunch the crowds downtown were really unbelievable, and we decided to try and escape some of the commotion by visiting Hyde Park and the University of Chicago.  Our guidebook suggested taking the Metra train, but we couldn’t find the downtown Metra station.  I asked a CTA fellow about it, but he would only give us directions to the CTA stop (Metra is the successor to the IC and other trains I rode as a kid, and shares neither stock nor management with the CTA).  So we caught the number 10 bus down to Hyde Park and the University of Chicago.  The bus dropped us off right in front of the Museum of Science and Industry, a building constructed for the World Columbian Exposition of 1893.  I remember there used to be a huge parking lot in front of the museum, but they’ve moved it into an underground parking garage.  This makes the entrance and building even more imposing.

But we didn’t visit that museum today; we walked over to the University to see the Robie House, the apogee of Frank Lloyd Wright’s Prairie School style.  CVH was more impressed than I; I’ve never been that much of a Wright fan.  After enjoying this study in horizontality, we visited the Oriental Institute.  This is an exhibition and library area for the University’s archaeological work in the Near and Middle East.  It is full of fascinating artifacts like these:

A large portrait of Ashurnasirpal II 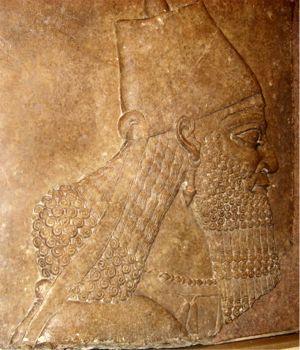 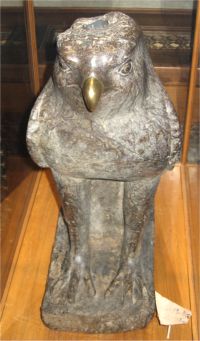 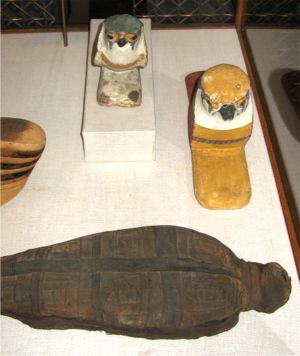 Once in Hyde Park, we were able to locate the Metra station there and used it for a surprisingly quick trip back downtown, although it does cost a little more than the CTA.  (This is the same train that kept blowing up in the movie “Source Code”.) 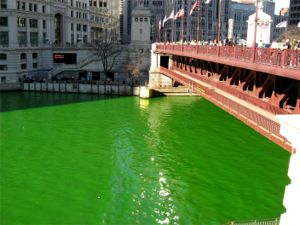 Finally we walked down to the river, and yes, they really do dye it green for St Patrick’s Day.