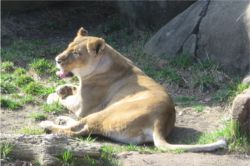 Yes, that phrase was invented in Chicago.  We got up and took the red line subway north toward the zoo.  We walked along the North Lake Shore Drive residential area where my grandmother used to live, and may well have walked right past her old apartment building, for all I can remember, and then took the bus on up to Lincoln Park and the zoo.  It was another warm and sunny day. We saw the seal, this lion (who really seemed to be enjoying the mild winter day), and a vulture.  CVH said the vulture was much uglier than the ones at the Louisville bird sanctuary where she volunteers. We went through the zoo’s bird house and saw several more birds. On the way out of the zoo we saw cute giraffes and bears and rhinoceroses; the usual fare. 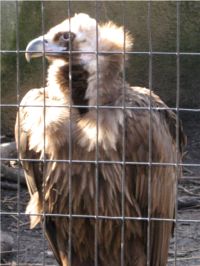 Just outside the zoo is the Lincoln Park Conservatory, basically a large greenhouse. It was full of plants that I’m sure are quite exotic to Chicagoans, especially in the winter, but to me they were just the stuff we had in our yard in Texas. They had one room of azaleas, and they were all in bloom. Impressive to the locals, perhaps, but I felt as if I had just been on the Houston spring garden tour. 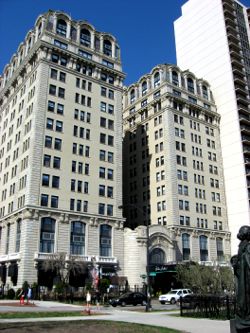 Just outside the park is this striking hotel/apartment building. They must have an unbelievably strong zoning commission to keep all these old buildings standing when it would obviously be much cheaper to demolish and build anew.

The CTA bus took us back downtown to the John Hancock building, and we went up for a beautiful view.  CVH particularly liked the open air “porch” that was there.  I liked the narrated tour.  This was a good value for the tourist dollar, and I’m glad we chose it instead of the Sears (Willis) tower.  I was struck by how many more tall buildings there are around Chicago now than forty years ago.  Where does all that money come from?  Anyway, you should note that the souvenirs are a little cheaper in the store in the basement of the Hancock than they are in the store at the top.

Once again, all this walking around had made us very hungry, and on the previous advice of a co-worker, we walked across the street to Water Tower Place, a big shopping mall.  It was packed.  Amazing that there are still places in America where people come downtown to shop.  The food court did not disappoint; there was a wide variety of options and we filled up at Foodease.  At Foodease, you pick out a bunch of stuff that is already made up; sort of like eating at a deli or Whole Foods.

After lunch, we wandered through a little of the mall.  We looked at nice luggage bags at the Tumi store, but did not buy one.  We did get a tangrams puzzle at the Marbles store, where they specialize in “thinking” toys and games.  We settled on the tangrams after we each picked out a game that the other figured they would never win. 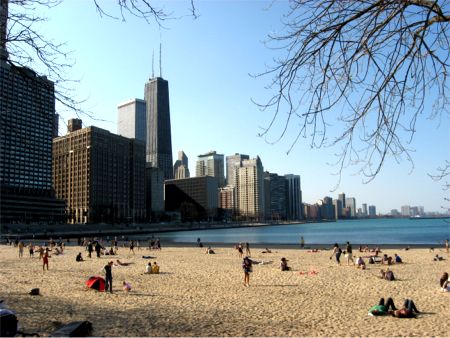 From Water Tower, another bus ride to Navy Pier.  Packed.  Used the bathroom, and then walked to the beach next door.  It was truly incredible to see women wearing bikinis on the beach in Chicago in March, and not be inappropriately dressed for the weather.

We rode the bus down State Street, that Great Street, back to the hotel, and then again down State Street to Lou Malnati’s for a deep dish pizza.  We had the “Lou” – spinach, mushrooms, and tomatoes.  Bus back up State Street (we’re getting our money’s worth out of our CTA passes) to Froyo’s, a frozen yogurt bar.  I got the tart yogurt with ground up Nestles Crunch bars.  I really like Crunch bars.

Finally, bus back down State Street (and we got the same driver we had on the way up, who greeted us warmly) to the biggest, fanciest Walgreen’s we had ever seen (Walgreen’s, of course, was founded in Chicago).  CVH has often said that if you can’t get it at Walgreen’s, you don’t need it, and this store proved her maxim.  They even have wine tastings there.