Chicago is Tuggin’ my Sleeve

Yes, Old Blue Eyes had it right.  Our last day in Chicago, and we decided to try the famous Heaven On Seven restaurant where supposedly you can get a fine Cajun breakfast.  And perhaps you can, but they don’t open until nine, which is pretty late for a Cajun to be eating breakfast.  So we went next door to the Pittsfield building (1927; Graham, Anderson, Probst and White, architects) and had a nice breakfast there.

Another hop on the bus up to the Chicago History Museum.  CVH thought this would be a good idea, because seeing all the Chicago history items together at the end of our trip, after seeing so many separately over the weekend, would help cement the memories in our minds.  The museum is a very kid-friendly place (read: noisy!), but it really did help bring many of our experiences together. 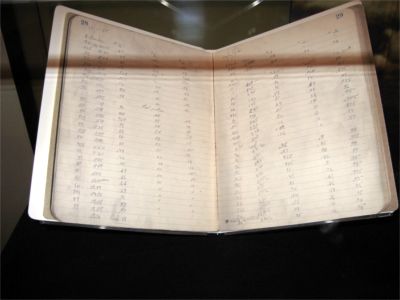 We saw the notebook that recorded the first self-sustaining atomic reaction, created by Enrico Fermi and associates at the University of Chicago.  The relevant notation is there in the lower left hand corner of page 29.  It reads “We’re cookin!”

Another interesting exhibit presented the dresses of designer Charles James.  In addition to the pretty dresses on display, they had CAT scans and demonstrations of the engineering behind how the dresses were constructed.  If you’ve ever wondered how movie stars, etc, can sit down in those things, this exhibit has an explanation.

The museum also has a nice gift shop with lots of souvenirs.  Among other things, I bought a little flag of the City of Chicago. 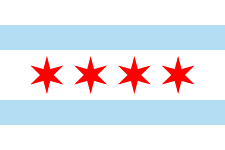 Jeff told us that the two blue bars represent the two branches of the Chicago River, and the four stars represent four important events in Chicago history: the founding of Fort Dearborn, the Great Fire of 1871, the World Columbian Exposition of 1893, and the Century of Progress World’s Fair of 1933.  It is a handsome flag.

But finally it was time to go; we caught the bus to the Red Line subway, the subway to the hotel, collected our bags and took the Orange Line back out to Midway airport.  I was able to sit in the last seat of the last car of the train and watch the city recede into the distance.  CVH says this sort of behavior, which she has observed before, clearly marks me as a “station wagon kid”. When we arrived at the airport, we decided it would be a good idea to look for something for lunch, because it would be a while before we could have dinner.  All of a sudden I realized that I had spent an entire weekend in Chicago without eating a Chicago Dog!  Fortunately, there was a hot dog stand in the airport that made an acceptable Chicago Dog. 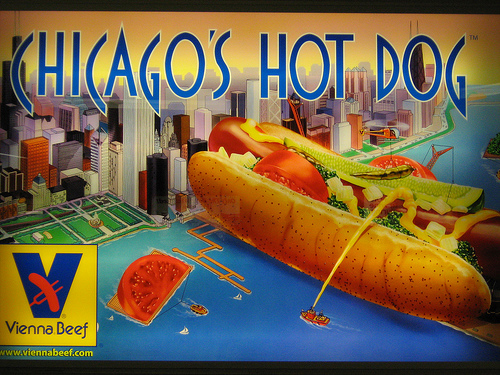