Jeff is a Righteous Dude

Monday morning; up and downstairs for breakfast.  While we were eating, CVH said “That looks like a real Chicago scene over there at that table; the black guy, the burly guy, and that one guy who looks like Sonny Steelgrave.”

Before we left for Chicago, we made arrangements with the Chicago Tourism people for a tour with a volunteer Chicagoan.  This morning we met our tour guide, Jeff, at the Chicago Cultural Center, and he gave us a tour of the Loop.

Jeff was a great tour guide.  He’s a fifth generation Chicagoan (his great-great-grandfather was burned out of his house by the great fire of 1871), and is a cornucopia of Chicago history and information.  We started with a tour of the Cultural Center itself, the former Chicago City Library and G.A.R. hall.  Incredible numbers of little mosaic tiles cover the floors and walls and there is a lighted stained glass Tiffany dome atop the big reception hall.  Jeff told us that when the British Crown heard about the devastation of the fire, they sent over thousands of books to replenish the library.  Only thing was, Chicago hadn’t had a city library.  But they weren’t about to be ungracious over such a generous gift, and so decided to go ahead and build one. 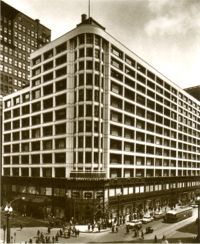 Carson Pirie Scott in its heyday

Jeff then proceeded to show us what seemed to be every famous building in downtown Chicago, along with a story for each one.  The Auditorium Building, the Monadnock, the Carson Pirie Scott (soon to be a Target), the Chicago Building, the new Library with its lovely skylit Winter Garden on the top floor, Jahn’s Thompson Center with its giant “how do they air-condition this” lobby, First United Methodist Church (tallest church in the world), the First National Bank of Chicago with its Chagall mosaic mural, the Board of Trade, the Rookery, the Fisher Building, and several others whose names I have not been able to remember. 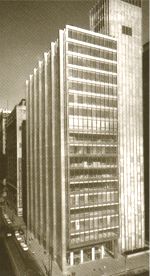 We saw the stunning Inland Steel Building, with its curtains of glass.  There are no internal columns blocking the office space in this building; the projecting columns, encased in stainless steel, carry the weight, allowing over ten thousand square feet of open space on each floor.

Jeff took us into the Marquette Building, where a series of reliefs depicts the seventeenth century travels of the Jesuit priest, Jacques Marquette, through the area.  This wonderful 1895 seventeen story skyscraper features Chicago windows, multiple cornices, a sculpted terra-cotta and brick skin, and is the headquarters for the MacArthur foundation.  In the lobby, over one of the elevators, there is a portrait of the Indian chief Chicagou.  Now you know.

One thing that struck me about all these buildings were the number of mosaic tiled floors and walls.  There must have been thousands of mosaickers (or whatever they’re called) who descended on Chicago after the big fire.  At times I felt like I was in ancient Rome, there were some many little tiles around.

As we walked back up Michigan Avenue, Jeff pointed out “The Spearman and The Bowman”, sculptures of two aboriginal Americans which originally flanked a grand staircase to Buckingham Fountain.  However, the Spearman is not holding a spear, and the Bowman is not holding a bow, apparently because the sculptor was a pacifist and did not want to depict such warlike instruments.  We all wondered why he took the commission in the first place.

One of the last buildings that Jeff took us into was the old Studebaker Building.  This building sits right on Michigan Avenue in one of the most desirable streetfronts in the entire city, and yet the interior doesn’t seem to have been touched in ninety years.  The elevators are still the old-fashioned elevator operator kind – where the operator has to open and close the doors by hand and line up the car with the floor by hand when he stops.  Some of you reading this have no idea what I am talking about.  It was really cool.

Well, all that touring took up the morning, and after lunch we headed to the Art Institute.  I must say that for a place that has organized such a wonderful collection of art, the map they give you upon entering is terrible.  We got turned around and confused on several occasions, and I consider myself a pretty good map reader.  I don’t know if they do that on purpose to help foil would-be art thieves, or if you get a better map if you pay the premium entry fee.  In any event, we were able to finally find American Gothic, the haystacks, Nighthawks, the seated Buddha, and La Grande Jatte – most of the big tourist destinations.

That night we took the bus (our CTA pass again) to The Parthenon.  We don’t have a flaming-cheese-and-Opa!-style restaurant in Louisville, so this was a chance to have some good trigona, octopus in wine sauce, dolmades, cheese pie, eggplant spread, fish-roe spread, bean salad, moussaka, pastitsio, roast lamb, and roasted potatoes. We were full.