During the summer, like right now, it doesn’t always rain a whole lot here, and the Ohio river gets low.  This was a problem back in the day when getting around the Midwest meant going up and down the Ohio River.  Due to a series of falls right where the river passes Louisville, boats were often stuck here waiting for favorable water conditions.  Which is how this town came to be in the first place. 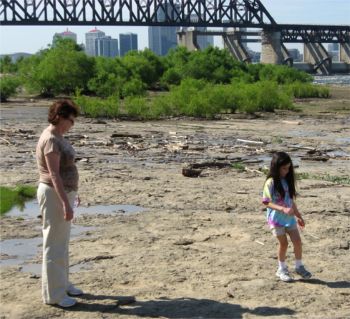 At the fossil beds

What it means for us, though, is that the bottom of the river is exposed over on the Indiana side and that rocky bottom is full of millions and millions of fossil remains.  Today we took Grandchild 1 and climbed down there and ran around looking at some of the fossilized horn ferns and shells and other things that covered this part of the world way back when.  Because second graders can get pretty bored by fossil rocks pretty quick, there are also lots of little pools that you can float driftwood in and pretend they are boats.  And you can look at the big bridges and buildings.  It amazes me how normal small children will still act if you can just get them out from behind their video games. 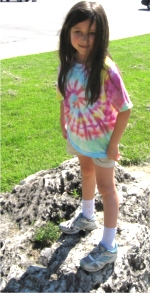 On a fossil rock 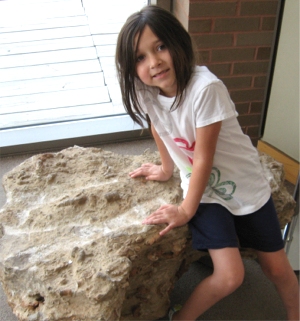 On another fossil rock