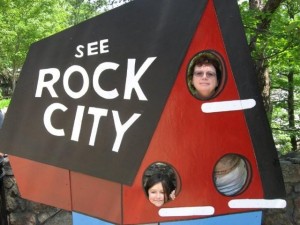 We decided to take the advice of the barn sign and see Rock City. 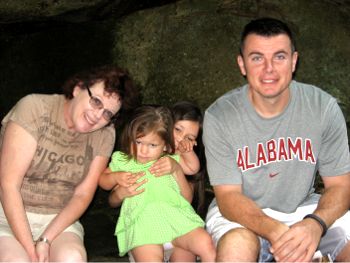 I had seen Rock city before, when I was about the age of Grand Child 1, and when CVH said she had never been, I thought it was time for her to go, but I was a little concerned about how the  institution had fared in the intervening forty five years. After all, it was old fashioned even in 1960’s.  I should not have worried. They’ve done a great job maintaining the place (although several of the little imported gnomes have followed their brethren to the great garden in the sky), and CVH thought it was a lovely place, if a little old fashioned.   The camera obscura is no more; but in its place was a nice garden area where we sat and ate our hot dogs while we enjoyed the spectacular view. 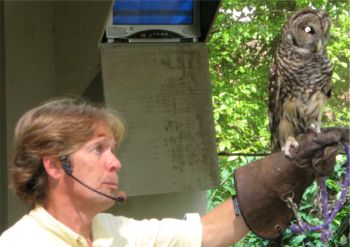 Also new was the raptor show; this was an excellent show, allowing several very up-close looks at the birds (one flew so close his feathers brushed my hat); CVH really enjoyed this.  Since you exit through the gift shop, we of course bought a bunch of souvenirs; they don’t automatically put a bumper sticker on your car anymore (primarily because cars don’t have bumpers these days, I suppose), so I got the View Master 3D reels and a little cardboard “SEE ROCK CITY” birdhouse for nostalgia’s sake.

We were all tired after walking around the gardens and a couple of us were cranky, so we came back to the hotel for either naps or swimming in the pool, depending on one’s predilection.  We ate dinner at 212 Market, a restaurant known for its use of local ingredients, and followed this with a walk to the river where we could see the huge river boats tied up along shore, as well as a number of small recreational watercraft. We stopped at the Ben & Jerrys store on the way back, and then did some more shopping at the local souvenir shops.

And for some reason, they drive an awful lot of Nissan Altimas in this town.

This entry was posted in Food & Eats, Outdoors. Bookmark the permalink.