I took Grandchild 1 back to Indiana today to see the museum at the Falls of Ohio.  This time we learned about how the Ohio River Valley was formed, how the indigenous people of the region lived, how the U.S. Government carved up some of that region and gave it to the soldiers who fought alongside Clark when he took it from the British, and why the fossils there are of tropical plants and animals even though we’re up here in the Midwest now. 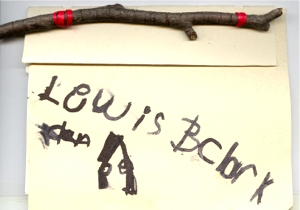 After visiting the museum exhibits, we took a shuttle over to the site of where General Clark lived after the war.  The Hoosiers were putting on the first annual George Rogers Clark Days there.  We saw an actor portray the General in his later years, reminiscing about his glory days.  We also made our own little Lewis-and-Clark-style pioneer journal and heard a small cannon fire.  I find these volunteers who research and relive the early pioneer days fascinating, but GC1 declared it “boring”. 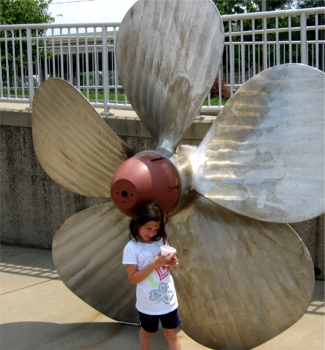 On the way home we stopped at the McAlpine locks, but naturally there wasn’t a barge in sight so we didn’t get to see the water go up and down.  We did see this large propeller from a riverboat.  Forged from solid stainless steel, it is pretty cool.