The Judgement of Conrad

A while back, I was walking across the parking lot with some co-workers when I made a reference to the Trojan War.  I sensed that some of them were somewhat bemused by my referring to the war as an historical event. 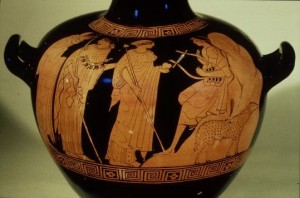 The Judgement of Paris

“Well,” I explained, “we know there was a Troy, and we’ve known where it is since at least the times of the ancient Romans.  It’s right where Homer said it was.”

“And in the twentieth century, it was excavated down to time when Homer said the war occurred, and the remains of the city then look like Homer said it looked.  And the evidence shows that this city was sacked.”

“Now, was there a wooden horse, and Hector and Achilles?  Maybe yes, maybe no.  But I think it’s clear that something big happened there; something so big that we’re still talking about it over three thousand years later.”

So don’t you believe the Trojan War actually occurred?  I thought everybody did.

This entry was posted in Things you may find interesting. Bookmark the permalink.