Into the rain forest 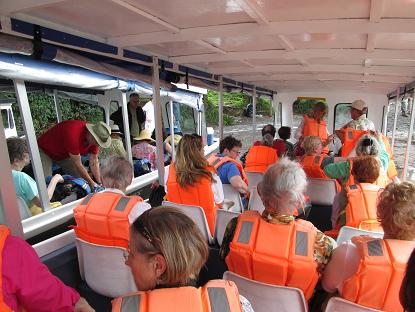 Heading into the rain forest

Now we headed off to the rain forest, on the Caribbean coast.  We would be staying in a wildlife sanctuary, and there are only two ways to get there.  One way, if you’re rich, is to fly in a small plane.  We took the other way.

Our bus drove to the end of the paved road, and then about another half hour on dirt to where the road really came to an end.  Here we all got on a boat.

It’s about an hour on the boat to get to Tortuguero.  You really feel like you’re in the middle of nowhere during the trip. 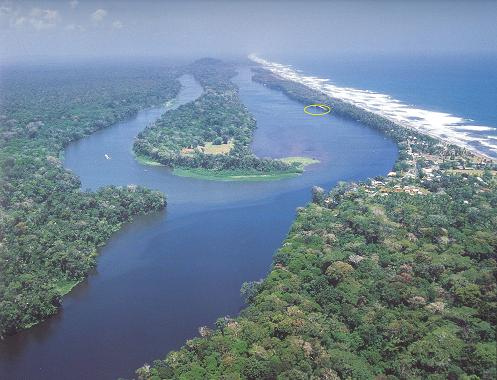 Our lodge location is indicated by the yellow circle on the picture above. Accommodations here in the national preserve are simple. There isn’t much electricity, so your cabin has few light bulbs; there’s no phone, TV, air conditioning, or much hot water.

It rains a lot in the rain forest. Yes, I know you would expect this, but you don’t expect just how much it really rains in the rain forest. It pours for hours at a rate of one to two inches an hour. It makes quite a roar on the roof of your cabin. Yet you can still hear the howling of the monkeys over this din. I figured that they are either extremely loud or extremely close; probably both.

I was thrilled to finally get to see gaudy tree frogs. They are difficult to photograph, as they generally only come out at night, and you shouldn’t use flash because they are very sensitive to light. I took these shots handheld, lit by a small flashlight. 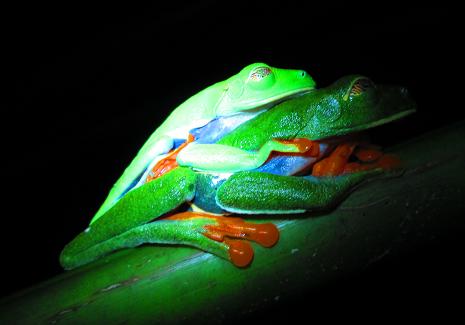