The Responsible Rally for Rover

The City has recently opened the Big Four Bridge across the Ohio River.  This is an old railroad bridge that dates back to nineteenth century.  The bridge approaches were removed in the 1960’s, leaving the waterfront skyline with an old bridge that didn’t go anywhere.  This was not a particularly appealing sight.

But now that problem has been addressed.  Sort of.  A wonderful new approach to the bridge from Louisville’s Waterfront Park allows joggers, walkers, runners, and bicyclists (sorry, skaters – you should have shown up for the council meeting that night) to spiral up to the bridge and go over the river.  Over the river, that is, but not into Indiana, as they haven’t finished the approach on their side.

In any event, the bridge has proven surprisingly popular, given that we’re still pretty much in winter here and it’s awfully cold down by the river.  One thing that happened right away is that a lot of dog owners brought their dogs to the bridge.  And a lot of those owners don’t pick up their dog’s droppings.  I don’t know why someone would bring their dog to walk over a bridge; I can’t imagine that the dog gets much out of it.  Perhaps these people have been bringing their dogs down to the park all along and the new bridge is just something else to walk on.

In any event, there was an immediate (and understandable) backlash against the dog poop on the bridge.  The public demanded action.  So some of the local humane organizations, who have seen what can happen in this country when anti-canine sentiment gets out of hand, apparently decided to head off the problem at the pass and hold a Responsible Rally for Rover to encourage dog walkers to pick up their pet’s poop.  I volunteered to help out.  Well, actually I volunteered to help with the kitten adoption activity that was going on this same weekend, but they said they needed me at the bridge more.  So to the bridge I went, on a cloudy, rainy, cold day.  That’s me below, just to the right of center in the yellow t-shirt (which is being worn over an Eddie Bauer foul weather coat, over a wool sweater, over a technical vest, over two layers of technical jerseys). 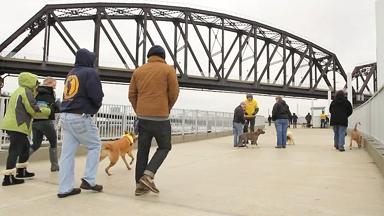 Me at the Big Four Bridge