After a foggy, near freezing morning, it turned into a beautiful spring afternoon.  I decided to cross the river into Indiana and hike the Lake Potoka trail.  (Lake Potoka is officially known as Potoka Lake, for reasons known only to the Indiana Department of Natural Resources.)

It’s a nice trail in the spring, but I could tell that it might be rather buggy in the summer, what with all the little damp areas that I had to cross.  The landscape is dotted with these big rocks. 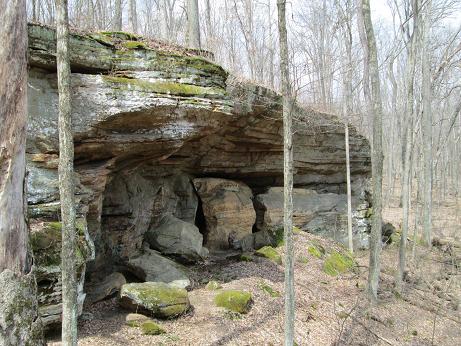 In places the trail is not well marked, and it took all of my Daniel Boonin’ (which, admittedly, is not that much) to pick it back up again. They give you a map when you go in, but it’s a rather schematic one, without any topographical features other than the lake, and if you’ve gone off the trail and into the lake, you’re probably going to know that without the map. However, I had my GPS with me and made a recording of the path, so next time I will be fully prepared.