The Dalai Lama Speaks to Us 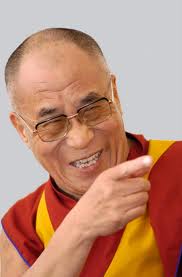 The Dalai Lama came to town this weekend to bless the local Buddhist hangout, and among other things, give an all-day lecture on Buddhist philosophy. The blessing and other appearances were a invitation-only events and we were not invited, but they sold tickets to the lecture, which was held at the arena downtown.

The venue, the arena, was okay; it was very cold and you could tell who had been there before – they were the ones wearing jackets, sweaters, and hoodies. Now we know. They also did not turn on the lights in the audience area. Come on! It’s a lecture! People are going to want to take notes. They did have a couple of nice big monitors so that you could see close-up images of Mr. Lama as he spoke and pulled his robes around him to try and stay warm.

The first hour and a half or so of his talk focussed on the general purpose of religion: spreading love and compassion and all that stuff, and how the major religions have this in common. He spoke about how the acquistion of material goods does not produce peace of mind. Interestingly, he did not recommend that people in non-Buddhist countries convert to Buddhism.  “Stick with your own traditions”, he advised; it will avoid a lot of problems.  He used the simple sixth-grade-level English that we’re used to from political speeches. It was beginning to sound rather pop-psychology, like something you would hear from a Doctor So-and-So on TV, and I was wondering if this was all we were going to get.

But then he started discussing “our text for today”, which was Atisha’s Lamp for the Path to Enlightenment. This is a treatise of about fifty stanzas that was written in the ninth century. At this point, the Dalai Lama switched from English to Tibetan and put his pedal to the metal. He covered the basic tenets of Buddhism before lunch and when we came back he tore all the way to the doctrines of noself and emptiness. It was an impressive performance, especially for a seventy-seven year-old man.

During the breaks, they played music by flautist Nawang Khechog. When they flashed his name and picture up on the giant monitor, I asked CVH, who was working email on her phone, to email me his name. “Who?” she asked. “The guy playing the music. I want to see if he’s on Spotify.” “He’s playing down there?” she asked as she peered down at the empty stage. “No, he’s not here! That’s just a recording. Email me his name; I want to see if I can find his music online.” She went ahead and emailed me his name just in time for a fellow to come out on stage and announce that it was his great pleasure to introduce the Grammy-nominated Nawang Khechog, who then came out and played a piece for us.

I have to mention that the Dalai Lama has a great laugh, as all Buddhist monks seem to have. I think they study this in the monastery.