Zero degrees Fahrenheit.  Wind chill at the waterfront of twenty below.  We bundle up and head off towards the Field Museum of Natural History.  It was so cold standing outside waiting for the bus that I thought CVH was going to die.  After she killed me first.

But we got to the museum; the first time I’d been there in fifty years.  I was surprised that some of the exhibits in the main hall that I seen the last time were still there!  And they were looking just as good after fifty years (unlike me).  This really impressed upon me the skills of the conservators there. 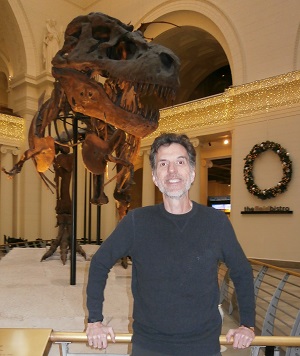 One of the displays that was different, though, was the dinosaur out on the main floor.  I’m not sure what happened to the old one; I heard dark rumors that it wasn’t the dinosaur paleontologists once thought it was, and it had been moved outside the museum, or possibly even deaccessioned.

However, we weren’t there to dwell on the negative; instead we went to see the new dinosaur, the eight million dollar Sue: the best T-Rex ever discovered.

Last Christmas, I read Devil in the White City by Erik Lawson, a wonderful history of (among other things) the 1893 Colombian Exposition in Chicago.  This year, the Field Museum dug deep into its collection to show off some of the items that were displayed at that exposition so that you could see some of what people saw back then.  I can only imagine how amazing this all must have been in those days when there was so much less competing for people’s entertainment span of attention. 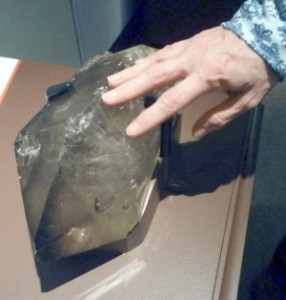 This is CVH touching a piece of smoky quartz from Austria that the 1893 visitors also touched. 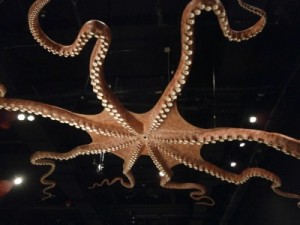 Then, while CVH went off to wonder at the Hall of Birds, I visited the reconstructed tomb of Unis-ankh. I had a personally guided tour.

Parts of the tomb, such as the cartouche of Unis-ankh (with the hare) seen here, are from the actual tomb, carved over four thousand years ago. This stuff just boggles my mind. There were human mummies, cat mummies, a recreation of a cat-goddess shrine, and original boat from the Middle Kingdom which had been used to prove the carbon-dating apparatus at the University of Chicago. There were several dioramas depicting the death rituals in great detail. A very interesting and informative exhibit. Meanwhile, CVH saw a bunch of dead birds.

It took us a while to find the cafeteria (we got lost in Africa first), but there we had wild mushroom soup, pumpkin soup with carmelized pears, and a chicken frisee salad. Refreshed, we then went to look at Sue’s real head (the one downstairs is fake because the real one weighed too much to mount on the rest of the skeleton). Here we found out more about Sue and her history, including the fact that the museum paid eight million dollars for the skeleton. Not mentioned was the museum’s alleged debt difficulties. 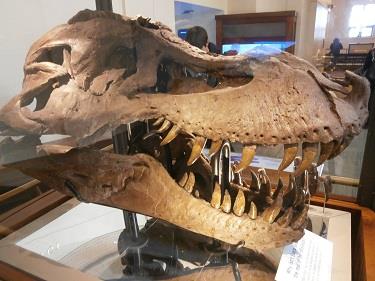