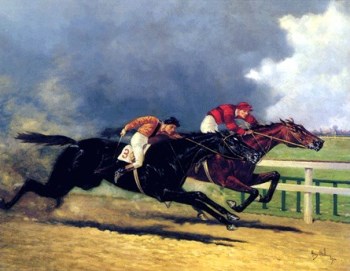 It’s always amazing to me how Louisville takes a two minute horse race and stretches it out into a week, sometimes two, of partying.  Yes, Indianapolis extends the 500 for an entire month, but you can see the contenders at the track most any day during that period.  Perhaps this is a Midwestern thing.

The festivities really start getting cranked up on the Thursday before Derby, known as Thurby in these parts.  This has become the “locals day”, when hoi polloi can to to the track and take in some of the racing excitement and atmosphere without the crowds and expense of the big days.  Friday is Oaks; they close the schools.  Saturday is Derby, basically an official holiday in Louisville (we went to the library yesterday and there was a sign posted that it would be closed Saturday “for the holiday”).

CVH went to Thurby this year; it was her first visit inside of the Downs.  She got to see Millionaire’s Row, the huge new JumboTron (the largest in the world – or western hemisphere – or something), and the horses galloping down the track right in front of her.  She got a big kick out of it and wants to go back next year.

There’s a highly regarded Indian restaurant in our neighborhood, Dak Shin, and we headed there after the library.  It is said that if you know your way around South Indian food, you can order anything and the chef will make it for you.  However, we were starving so we opted for the lunch buffet.

The only thing that I sometimes find annoying about Dak Shin is the constant, and rather loud, use of televisions in their dining area.  If you simply cannot stand Indian music videos or Bollywood musicals, this is not the place for you.  However, they had something different on today that we hadn’t seen before – sports.  No, not horse racing, but cricket.  As we entered the buffet line, the score was announced as fifty-nine to one.  “Fifty-nine to one,” I repeated aloud.  “I don’t know anything about cricket, but that can’t be good.”  The woman next to me chuckled.  By the time we left, the score was one hundred and fifteen to three.  Yes, that’s 115 to 3.  The amazing thing was that the stadium was still packed with thousands of spectators and they were still cheering.  There must be something about scoring cricket that I just don’t know.