The weather is warming, the sun is shining, and after a long winter, CVH was itching to take a “road trip”.  Since we couldn’t leave until after nine a.m., and had to be home by dark, it was going to be an day road trip.  She wanted to see some of French Lick, I wanted to see some hiking trails in the Hoosier National Forest.  Fortunately, there’s a road that runs right from one to the other.  Sort of. 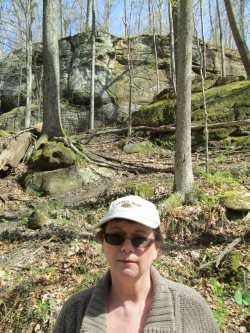 In the excellent book Five Star Trails: Louisville and Southern Indiana, I found a glowing review of Hemlock Cliffs.  It’s only a short trail, about two kilometers, but it’s the best two kilometer trail I’ve found so far around here for spring time scenery.  The cliffs, rocks, and waterfalls are beautiful and easily seen through the just budding out trees.  Any earlier, and the landscape would have been too dead; any later, and the leaves would block too much cliff.  The book does warn, and I believe it, that the trail fills up quickly on spring weekends for this very reason.  In the middle of the week, though, it was a great visit.  Note that to get to the trailhead, where there is not a lot of parking, you have to go down a one lane gravel road.  I’m not sure how the weekend traffic ever gets in and out of there. 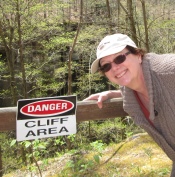 If you go, note that there are a couple of places around the cliffs which would be pretty dicey in wet weather.  But if you are careful, as CVH is here, you will get to see and hear the echoing bubbling of the falling waters. 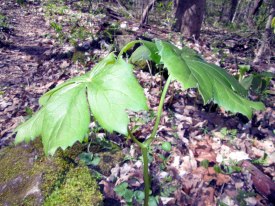 After visiting Hemlock Cliffs, we headed up toward French Lick.  There are not a lot of eating options in the forest proper (unless you choose the Euwell Gibbons route), so when we saw the Schwartz Family Restaurant was open, we swung in.  Although this Schwartz Family cafeteria is unlikely to be awarded a Michelin star, it does have a lot going for it: you can come in wearing your hiking clothes, the food is all made on site, mostly from their own farm, the chickens are hormone- and antibiotic-free, and the portions are very generous.  Just be careful if you pull into the parking lot right after a large bus of seniors, as you will be in for a wait. 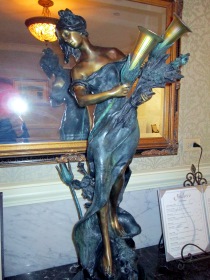 Me, my flash, and a statue

We filled our tummies at Schwartz’s, and CVH even got the recipe for their raisin pie.  A few more minutes up the road, and we were at French Lick/West Baden.  We skipped the casino and went to tour the grand old West Baden resort.  It’s a beautiful building from outside, and the big lobby inside feels like the Astrodome.

We drove around the grounds, looked at the old train, and went back to the forest to take a look at Patoka Lake.  We saw the houseboats that you can rent (two days, thirteen hundred dollars; the luxury West Baden is a real bargain by comparison).  The raptors at the nature center were not on display, but as we walked from the building to the trail, we could hear the little eeso (Eastern Screech Owl) that they had there hooting and there was another one in the woods hooting back.  I don’t know what all they were saying, but I suspect there was enough meaning in there for a sonnet or two. 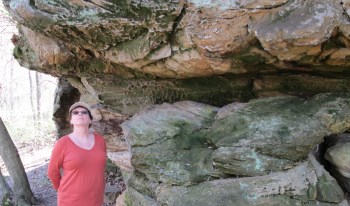 I took CVH below the nature center to see some more big rocks.  Here she pensively studies a large outcrop that I asked her to stand underneath.

This entry was posted in News from Louisville, Outdoors, Vacation. Bookmark the permalink.