Today Louisville hosted the 10th Annual Jug Band Jubilee.  A good time was had by all.

Jug Band music refers primarily to pre-WW II white people music, although I heard a lot of Mississippi blues this year.  I caught three of the bands (all the longer that my old butt can handle sitting out on the grass these days).  The first were the Cincinnati Dancing Pigs.  These guys may not be the most technically proficient players, but they have excellent stage presence and put on a good show.  The highlight of their set was the story of when the National Organization of Women held their conference in Cincinnati, and (according the band leader) made the mistake of arranging the Pigs to provide musical entertainment.  Well, you may know that chili is a very popular dish in Cincinnati, but it is prepared with a variety of ingredients – sometimes with cheese, sometimes without; sometimes with spaghetti, sometimes without. So when you order chili in Cincinnati, you do so by number, indicating the number of ingredients in your bowl of chili.  The Pigs decided to give the conference attendees a little of this local color by writing a song called “I want to have a three-way with everybody here”.

After the Pigs, the Drunken Catfish Ramblers from New Orleans took the stage.  They had some real musicians, but just couldn’t seem to get their set together, and it left me unsatisfied.

The last band I saw was the Jake Leg Stompers from Tennessee.  These guys had it all.  They put on a great combination of traditional Jug Band as well as old time gospel.  I don’t think the Stompers ever have a problem getting gigs. 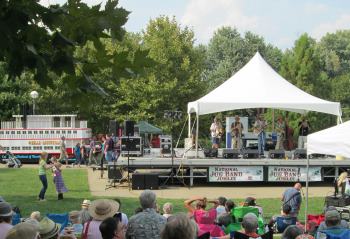