Spent the last week in Dallas, visiting and house-sitting for a friend in the hospital.  Although not as big as Houston or Chicago, it certainly qualifies as a Big City, especially if it’s been a long time since you’ve been in the Big City.  After several trips to the Louisville airport, the size of DFW is striking, as is the miles and miles of freeways and tollways and light rail running every which way.  I went to the HEB Central Market and The Container Store and some fan-cy highfalutin’ pricey Dallas shops the kind of which we just don’t have here in Louisville.  It was almost as if I’d become somebody from a Mellencamp lyric.

The house was very nice, and although the neighborhood was being built up at a rapid pace – there was an eight to ten thousand square foot mansion across the street – it was still kind of out in the woods (I could hear coyotes nearby at night).  There were lots of lovely plants in the front: 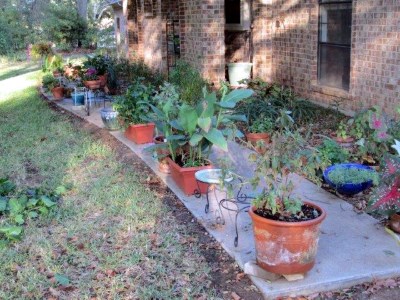 And horses in the back yard:

I got to ride into downtown Dallas for the first time in years – the parts down by the river looked very familiar, but the skyscrapers have grown out like a line of giant marching ants from there.  The Reunion “dandelion” still sticks out, and I recalled the time my cousin (who worked for IBM) took me there for a drink when I was a young man.  I don’t know how high up in the corporate hierarchy he was; fairly high, I think.   I remember that he wore a really nice suit.

And of course, it was sunnier and warmer than it is in Kentucky this time of year, so that was nice, too.

This entry was posted in Uncategorized. Bookmark the permalink.