CVH was in the mood to take an out-of-town vacation, and due to her work with the local Jewish community, she is only able to take days off during Jewish holidays.  Yom Kippur arrived at the end of September, giving us an opportunity for a long weekend out of town.  I thought Eastern Kentucky (Red River Gorge, etc) would be fun.  CVH wanted to go to Portland, Oregon.  I’m sure Portland is a very nice place, but although this is their sunny season, it’s still a very long way from Louisville to Portland.  CVH did not want to go somewhere teeming with chiggers and mosquitoes.  So I suggested we make our third trip to Chicago; it’s as visually stimulating as Paris, much closer, and they speak English. 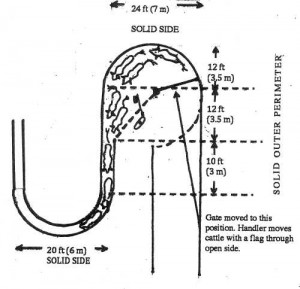 This morning we hopped on our favorite airline, Southwest, well before dawn (what were we thinking?).  Their procedure of assigning nearly everyone a sequential number, and then having people load in that order works quite well.  So well that CVH wondered if Temple Grandin developed it for Southwest. 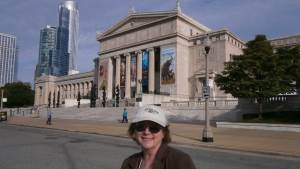 We landed at dawn, took the Orange Line into the city, dropped our bags at the hotel and ate breakfast.  By then the Field Museum was open; we hopped the bus and rode down there.  I wanted to see the “Evolving Planet” exhibit; CVH wanted to the see the Field conservation exhibit. 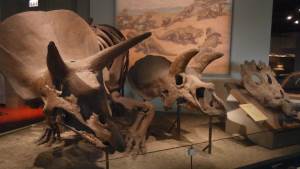 CVH said the conservation exhibit really kept her interest; I found the Evolving Planet exhibit absolutely mind-boggling.  There were thousands of fossils on display, and you know there are at least a thousand fossils behind every one that was shown; this exhibit reflected more man-centuries of work than I could guess.  Trilobites, plants and animals from the Carboniferous and every other Period, including lots of dinosaurs.  Lots. 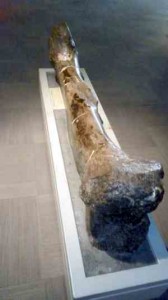 You can touch this bone. I have.

When I was about five years old, my mother took me to the Field Museum.  Bear in mind that the public space of the Museum covers over eleven acres.  Somehow, my mother wandered off (later, we found that her viewpoint was slightly different).  When she eventually made her way back, she found me entranced in front of a fossilized dinosaur bone that was placed out where you could touch it.  On this trip, many years later, I found that very same bone.

At the end of Evolving Planet, there was a display indicating how many species had gone extinct since the museum opened that morning.  It stood at seven.

CVH and I got back together and toured the Hall of Birds and the Halls of Mammals.

By now we were ready for lunch.