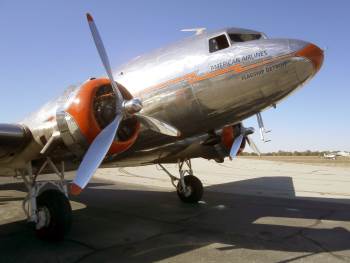 Flagship Detroit – it was so shiny!

Louisville has an older airport, Bowman Field, that is the oldest continually operating airport in the country.  During WW II, it was the busiest airport in the U.S.  Since we’ve been here, it has hosted such classic aircraft as B-17s and a Ford Tri-Motor.  Today a gloriously restored DC-3 was in town – the original 1937 American Airlines Flagship Detroit!  It flew for American from 1937 through 1947.  It’s powered by two Wright radial engines.  We live fairly close to Bowman Field and hear airplanes fly over on a regular basis.  But when you hear those big radials roar in the sky, you know something good is in town.

I went by this morning to see it, but it had sprung an oil leak in the starboard engine overnight.  They were dumping large quantities of kitty litter to clean it up.  You can see some of the spilled oil in this photograph; it’s the big pool right under the wing.  The guy on the far left was in charge of spreading the litter and cleaning up the spill.  I guessed he was not at the top of the chain.  Each engine holds around twenty-five gallons of oil, and they spilled about ten.  Each engine consumes about one to two gallons of oil an hour in flight. 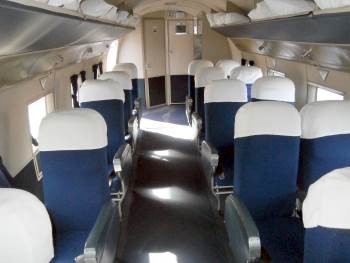 I came back later this afternoon and was able to board the plane. The cabin looked pretty much like any other airplane up until the early seventies. 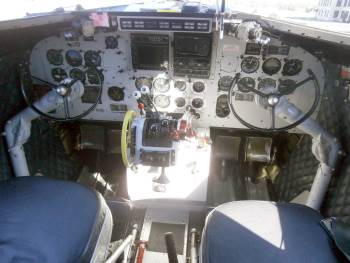 The cockpit looked like a flight simulator; they had upgraded the radio and added GPS, but otherwise was original.

And then we got to see them crank up the engines and taxi away to take off. I chatted with an old fellow who took his first plane ride in a DC-3 back in 1946. You can hear us talking about the prop wash in the video below. The sun flare is because the plane’s aluminium fuselage was super shiny. The propellers appear to be rotating slowly, but that’s just an illusion caused by the video camera  I love all this old stuff; cars, trains, airplanes.

And what it is like to start that old Wright radial engine on this airplane (not my video).