A Wrinkle in Time 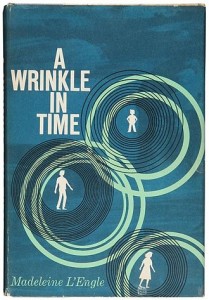 The edition I read

This evening we went to a staging of L’Engle’s A Wrinkle in Time.  (I wanted to see American Idiot, but got outvoted by CVH.) You read the book when you were a kid.  You are thinking that it would be hard to put on the stage.  You are right.  But for $20 a seat, the performance was a very, very good value.

The actors were much better than I was expecting at a venue that was at the next-to-last-train stop.  The kid who played the genius little brother, Charles Wallace, had even had a small part in Spike Lee’s Chi-Raq, and you don’t get even a small role in a Spike Lee film without some serious chops, which this kid surely had.

It was small on the outside.

Before the show, we ate at a hole-in-the-wall Vietnamese restaurant that was so good we thought we were back in Houston.  I went back after the show to get a dessert, but although his sign said open, he wouldn’t make me one, so don’t wait too late to put your order in.

It was small on the inside.

But you had a full view of the kitchen; Peter Freeborn would approve.