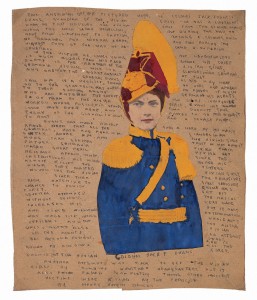 After filling up my swag bag at the vendor area, I headed uptown to the Intuit Gallery of Outsider Art.  They have proclaimed 2017 as their “Year of Darger”, the 125th birth anniversary of Henry Darger.  (You may know Henry from Natalie Merchant’s song about him on her Motherland album.)  Henry lived in Chicago nearly all his life, and did all his work there.  Most of his work, to the chagrin of the Chicago art community I am sure, is at the American Folk Art Museum in New York City.  I had seen some of the collection there and was looking forward to the display at Intuit.  The exhibition did not disappoint.  There were many iconic illustrations from In The Realms of the Unreal, and a recreation of Henry’s one-bedroom apartment with many of his actual belongings.  Not to be missed by any Darger fan.