Museum of Science and Industry

Another classic Chicago museum, built on the grounds of the 1893 Colombian exposition.  They had put their WW II submarine in a new exhibit since I was last there as a kid, so we decided to see that first, before the crowds show up.  This exhibit knocks it out of the park, and is a must-see if you get to Chicago.

You’re first led through a brief introduction of the start of the war and the build up of the Battle of the Atlantic.  This is followed by a recreation of the capture of the submarine.  Then you walk into the giant auditorium and are confronted by the huge nose of the sub right in your face.  It makes quite an impression.  The walkway leads you away from the nose down the side and underneath the boat.  It looks much larger than I expected, based on all the movies I’d seen of men crowded together in a tiny little metal box.  Sure enough, though, once you enter the sub, unlike the Tardis, it is not larger on the inside, but much, much smaller.  Turns out that all those ballast tanks take up most of the volume. 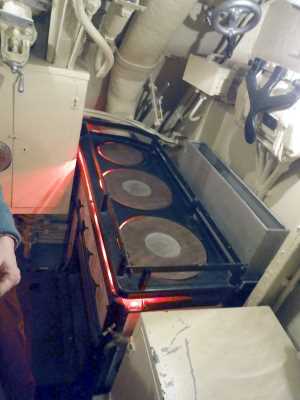 This is the galley that cooked all the meals for the crew of sixty for the three months they were scheduled to be at sea. 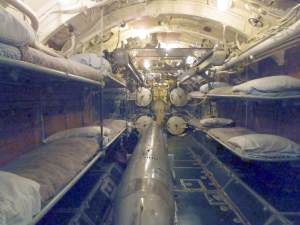 And here are the “hot bunks” in the torpedo room.  Few of the men on board ever saw the sun during their tour.

Other cool exhibits included a huge model train layout (CVH:boring), several real trains, a robot cow milker (CVH comes from a family of dairy farmers), a baby chick pecking its way out of its shell, and for the season, dozens of Christmas trees decorated in various national styles from around the world.

That evening we walked around the corner from our hotel to get some Chicago-style pizza, and finally took the subway down to the giant two-story-over-twenty-five-hundred-square-meters Walgreens inside the Loop at State & Randolph.  CVH has always maintained that if you can’t find it at Walgreens, you don’t need it, and this store certainly seems to prove that maxim (they have a sushi chef).