CVH needed to attend a professional conference this year, and decided on the American Society on Aging’s annual get-together in Chicago.  I decided to take the week off and tag along.

The day started well before sunrise, like most days in Louisville (people do like getting up early in this town for some reason), and we were off to the airport.  While we waited on our plane, a little bird which had flown into the terminal was hopping about the seating area.  I tossed it some sunflower seeds from my trail mix, but it didn’t care for those.  CVH dumped some crumbs from her breakfast biscuit and it enjoyed those much more.

When it finally got time to get on our plane, I sat down in my seat and realized that I had left my coat back in the terminal.  I zipped back up the jetway to recover it before takeoff.  That caused quite a stir. 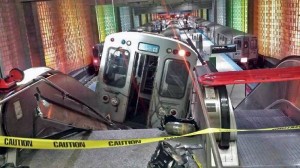 Luckily, this was not my train car.

Due to thunderstorms over Illinois, it took the plane a while to get into O’Hare.  CVH took the bags with her to the hotel on the shuttle van; I, the train lover, took the Blue Line train downtown.  Unfortunately, I left the directions from the train stop to the hotel in my bag.  Fortunately, downtown Chicago is bordered on three sides by water, and on the remaining side by Chicago’s South Side, so you can’t go too far before realizing you need to change direction.

The convention was huge, and so it was held in the largest Hyatt in Chicago.  In fact, it’s the largest Hyatt in the world.  Yet, it had no pool, the room had no refrigerator or microwave, there were no washing machines (I am picky about washing my clothes).  It had a really tiny vanity, a room so dark you couldn’t see what was in your suitcase, and no fluffy robe, either.  So what were we paying their high room rate for?   To top it off, they got our reservation goofed up and tried to kick us out after one night.  I had one of those embarrassing discussions at the front desk: “Do you have a confirmation number?” 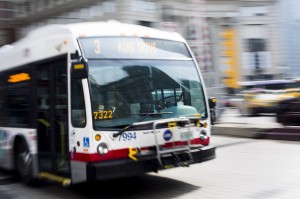 I stepped outside and quickly discovered that I had forgot my gloves, so I went shopping.  I caught the #3 bus headed up the Magnificent Mile.  I sat next to a nice old man who reminisced about the days when you could get a three-course chinese lunch on State Street for $3.99.  He had been a wine and champagne salesman and said he sold one of the first contracts to Trader Joe’s when they were just starting.  He calculated that if he had been on commission he would have earned eleven million dollars on that sale, but then it was my stop to get off.

Probably due to the (relatively) mild winter, the Columbia store had all their hats and gloves half-price and I bought a nice fleece pair. 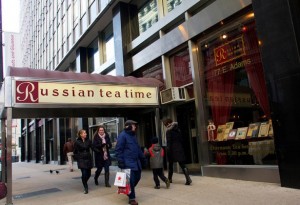 That evening, we decided to go to Manny’s (the best matzo ball soup in the universe) for dinner, and wouldn’t you know – they recently changed their hours, but not their website, and they no longer serve dinner on Mondays.  So we came back downtown and ate at Russian Tea Time. 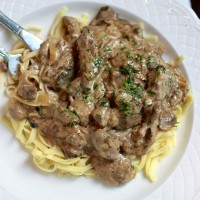 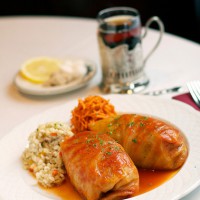 RTT has killer Russian food and drink.  We enjoyed the hearty bread (nearly a meal in itself), cabbage rolls, and beef stroganoff.