Five years ago, we visited Chicago and accidentally stumbled across the Oriental Institute at the University of Chicago.  This is a small but absolutely fascinating collection of Middle and Near East antiquities.  We didn’t have enough time to thoroughly explore then, so I decided I was going to make up for that on this visit.

Initially, I was going to take the morning express bus down the scenic Lake Shore Drive to the university.  But because I was held up so long at the front desk trying to be sure they weren’t going to throw all our luggage out onto the curb (see yesterday’s blog entry), I missed the last bus.  So I decided to take the Red Line to the South side and ride the bus crosstown to the University.  The Fodor’s guidebook lists this way, but says “people unfamiliar with Chicago may wish to consider an alternate route”.   Geez.  It’s not that dangerous to ride a bus with black people in Chicago.  Yes, I was the only white person I saw for most of my forty-five minute trip.

Anyway, I arrived without incident at the campus of the University.  In addition to visiting the Oriental Institute, I also wanted to find Henry Moore’s sculpture “Nuclear Energy” which sits at the (approximate) location of the first controlled nuclear reaction (“Chicago Pile 1”).  Old pictures make it appear easy to find, sitting out by itself, but since its installation it has been hemmed in by other structures and if you don’t know where it is you’re probably not going to find it. 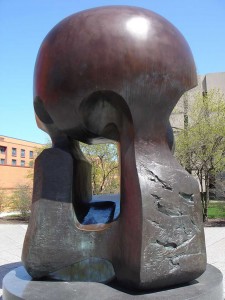 I thought it effectively evoked the genie that was let out of the bottle here.

Tuesday afternoon, CVH and I took the Brown Line train way out to North Kedzie and Albany Park.  We found ourselves in a mostly immigrant neighborhood; it was almost like being back in Houston (although much colder).  There were Mexican stores,  Middle Eastern meat markets, Persian restaurants, a Lebanese bakery, Pakistani senior apartments, Korean restaurants, and who knows what else we didn’t get around to seeing. 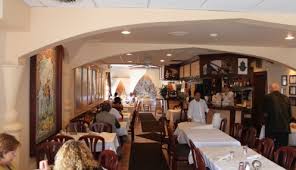 Alas, the Phở shop was now defunct, and we ate at Noon O Kabab, which advertises with the tag line “Food with Persianality”.  Yeah, that’s pretty bad, but their way with food is much better than their way with English. We had Joujeh, Torshi, Kash-Ke-Bademjan, Aash, and Tadig, all washed down with a bottle of Almaza.  I can’t tell you what it all was, other than delicious. 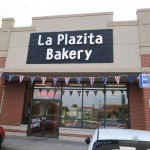 We stopped at La Plazita bakery.  Their sign says “Tenemos fresh deli sandwiches” – sounds fakey, but the desserts were genuine and made us feel like we were back at our old home in the Houston Heights.