It dawned very cold today in Chicago; below freezing and the wind made it feel even colder.  I planned to spend the morning in the nice warm Field Museum.

Got on the bus to the museum district and sat behind a woman with a nose stud (I will never get used to those) and her young boy.  As we approached Roosevelt street, she turned around and asked me if I knew which street to take to the museum.

“Then we should get off here?”

“No, this bus will take you down Roosevelt and drop you off right in front of the museum.”

“That’s great,” I said.  Pointing at her young boy, I added, “I’ve been coming to the Field since I was his age and I still love it.” A few moments later, the gigantic Field Museum loomed into view.  She turned around again.

“Is that the museum?”

“Yes.  We will turn right and come up in front of it shortly.”

“Should I pull the cord?”

“This is all new to us,” she repeated.

We got off the bus when it stopped and she saw the sign that said “Soldier Field”.

“What is Soldier Field?”

“Well,” and I pointed, “that’s where they play ball.”  Pointing again in turn, “That’s the Adler Planetarium, that’s the…uh…building where they keep fish…Aquarium!” (Grandpa’s wandered away from the home again, I’m sure she thought.) “And this is the Field Museum.”

“Where do you want to go first?” she asked her boy, and I thought to myself “First? – she doesn’t know what she is getting herself into”, and the boy answered “Field!”.  I told him he would be smarter at the end of today than he is now, and wished them both a good time. 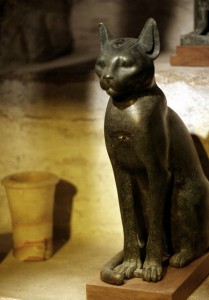 I had a good time, too, just as I knew I would.  I went through the Ancient Egypt exhibit, seeing things I missed last time, like this impressive sculpture of the Cat Goddess Bastet.  Now, there’s a cat you could worship.

I was also pleased to see that Malvina Hoffman’s great bronze sculptures from the old “Races of Man” exhibit are being placed back on display.  I remember the “Hall of Man” when I was a little kid.  Now they are no longer presented as “racial types” (whatever that was supposed to be), but rather as busts and statutes of individuals and it works very well.  Especially since the Museum does not whitewash the history of the original exhibit.

After seeing these and many, many other wonderful things, I was hungry.  I wanted a Chicago Dog. 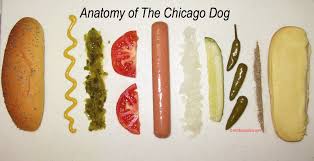 I rode the bus back downtown to where I thought I had seen a dog shop, but couldn’t find it.  I was freezing and hungry, so I went into the touristy Rudy’s.  Their Chicago Dog was fussy, not authentic, so I ordered their “Signature Burger” instead.  I asked for it medium.  It arrived, and I took a bite.  It was well done.  “Perhaps they had recently received a visit from an overzealous health inspector,” I thought.  But no, as I worked my way through the burger, it proceeded to medium well, medium, medium rare, and rare, averaging out to medium, after all.  Can’t recommend.  Try the Shake Shack around the corner. 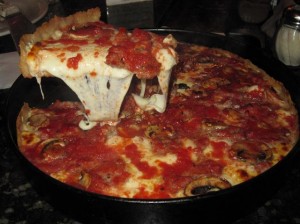 After the conference, CVH wanted a Chicago Pizza.  At first, she didn’t want to fight the traffic north to Pizzeria Uno (or Due) or south to Lou Malnati’s, so she wanted to get a hotel pizza.  I talked her out of that.  I said I would go down to Lou Malnati’s and bring her back one if she didn’t want to leave the room.  She said that would take too long.  So I said I passed a pizza joint inside the loop, let’s give it a try.  I didn’t tell her that it had looked like a touristy joint and was in fact right next to, and related to, the disappointing place I had eaten lunch.  But it was the closest pizzeria.  Turns out that we had a delicious pizza and salad at Pizano’s.  Our waiter had only been working there a few days and was eager to please.