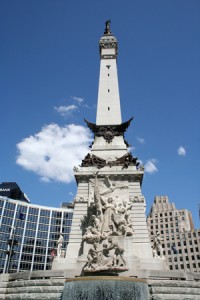 CVH is still, after all these years, a rabid Houston Rockets basketball fan.  She watches all the games on TV.

So when a business associate and all-around good guy mentioned to me that he had season tickets to the Pacers and would be happy to host us for the Pacers-Rockets game, CVH marked it on her calendar in big red letters.  Plus I was going to throw it in the basket of twenty-fifth anniversary credits that I’m trying to build up this year.

Monday 0900: Getting ready to leave.  Overnight bags are packed and in the car.  A  friend of CVH, who lives on the Indiana side of the river, has suggested avoiding the bridge construction by taking the bypass all the way around town.  Yes, I’m thinking, that would certainly avoid construction, but would add a lot of miles to the journey.  Checking the on-line traffic maps and cameras, I see that traffic through downtown is unusually light today.  Extremely light for a Monday, in fact.  So I decide we’ll just take the direct route.

Sure enough, we zip right downtown, over the bridge, and come to a screeching halt in Indiana.  After driving for what seems like a hour, I believe I can still see the “Welcome to Kentucky” sign in my rear-view mirror.  Eventually, though, after over an hour and a half, we are out of construction and sail uneventfully into downtown Indianapolis.

Since I lived there as a small boy, the city has built two large professional ball stadiums on the near south side of downtown, and this has dramatically transformed that area from an old rail/warehouse district into an hotel and entertainment hub.  Quite amazing.  Maybe these tax breaks for arenas really do pay off.  Maybe. 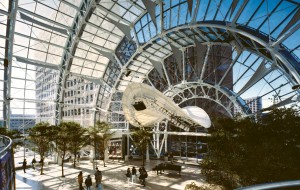 Thus fortified, it’s now time for a little walking around.  We visited the Arts Garden, reminiscent of the Winter Garden we saw in Chicago. 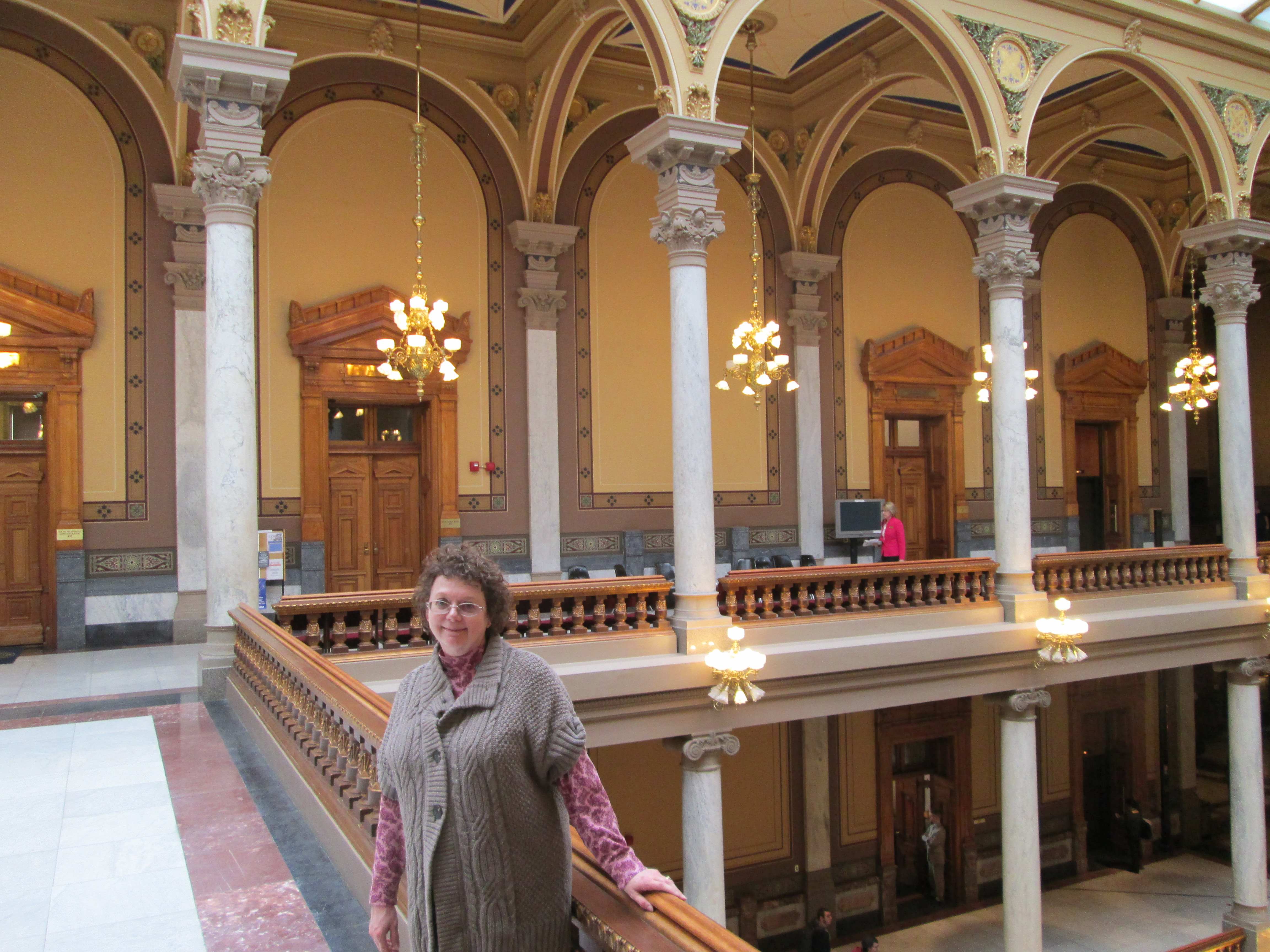 We toured the State House, just as I did when I was in fourth grade.  There were a lot of fourth graders there.  Here CVH poses. 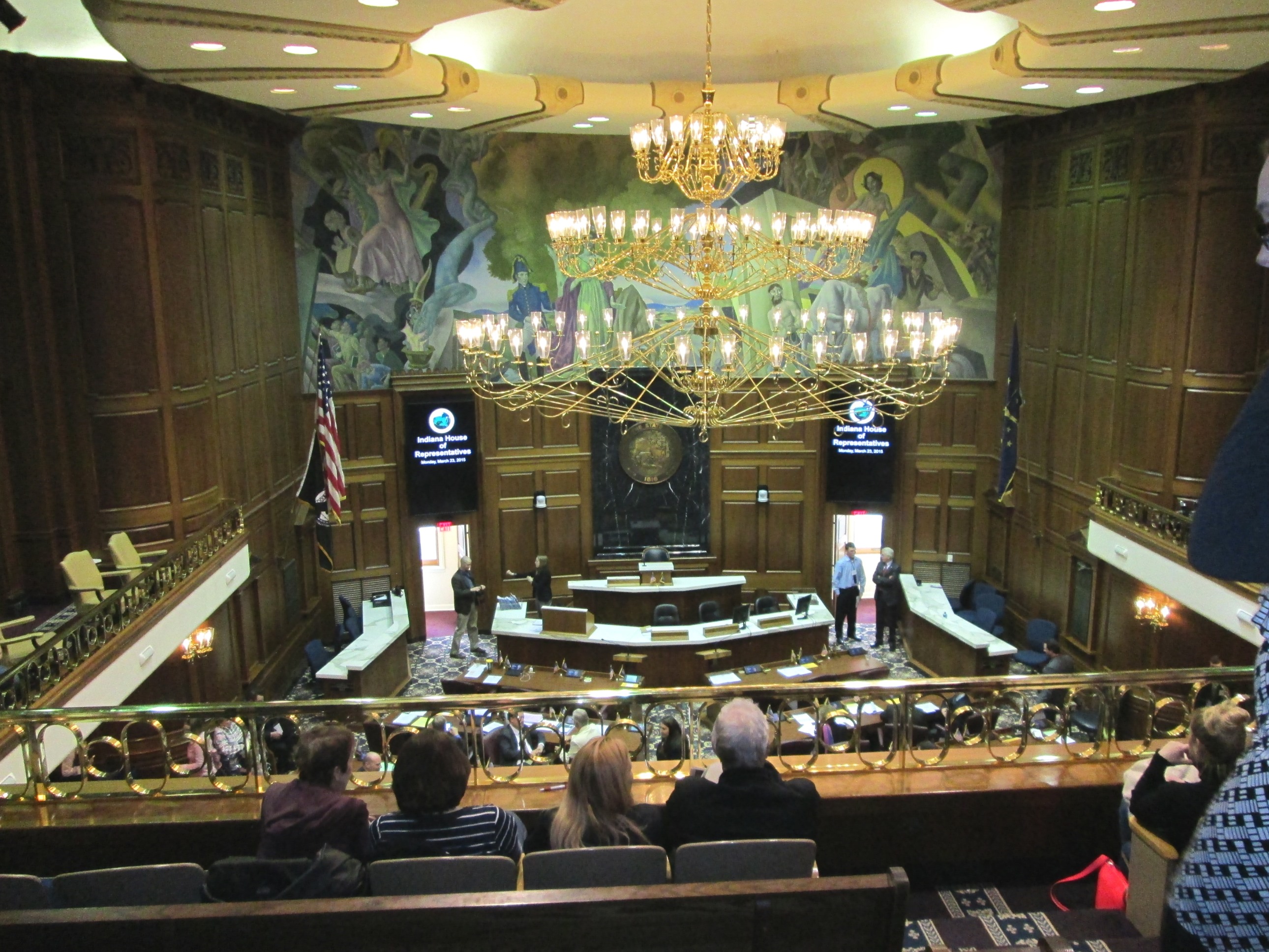 And we saw the Indiana House of Representatives chamber, with its huge 100 light chandelier (one light for each representative).

We stop at the Indiana State Museum gift shop to get a souvenir for Mama (a ball point pen that looks like a cardinal bird, which is the state bird of both Indiana and Kentucky).

Monday 1730: We meet our hosts, Greg and Jerry, at the Weber Grill restaurant.  As you might guess, they grill everything over giant Weber grills.  The restaurant is decorated in retro 1966 style (I loved it); you could imagine having a steak there before the Sinatra show.

Monday 1845: Time to head to the stadium, a short walk away.  As we near the entrance Greg turns and asks if anyone has a knife on them.

“OK, just palm it in one hand, show your keys in the other, and hold both arms up as you are scanned,” Greg advised.  I palmed my knife behind my ticket and there was indeed no problem.  Apparently Greg has dealt with this issue before.

The fieldhouse is rather unremarkable on the outside, but entering it was like walking into the middle of a three ring circus.  There was so much light and color and noise and activity I became disoriented.  There were bands playing and people dancing and pictures being taken and all sorts of food and drink being sold.  I didn’t have time to take any of this in and get my bearings because we were a little late; I got caught on the stairwell when the Star Spangled Banner started, but made it to my seat just in time for tip-off.

The seats were very nice, much more comfortable than the ones in the Houston basketball arena, and we had a great view.  CVH was beside herself.  The Rockets led the entire game, but the end was close enough that it was a real contest.  It was more interesting than I thought it was going to be (if a little repetitive); the live environment definitely enhances the experience.

Tuesday 0800: Wake up.  Get washed and dressed.  Run down the stairs to get a newspaper for CVH.  Back up the stairs to deliver the paper and then back down to the breakfast room for eggs and corn flakes.  Back up to room to read Dalai Lama while waiting on CVH.  0915: Back to breakfast room, this time with CVH for second breakfast course.

Tuesday 0945: Check out of hotel.  Drive down the street to Shapiro’s.  Why Shapiro’s?  Well, about this time last year we met with our accountant to review our tax returns.  After going over a number of items, he asked me if I had any more questions.  Taking note of his apparent ethic background, I said “Yes. Where can you get a good pastrami in this town?”

“You can’t.  The nearest place is Shapiro’s, in Indianapolis.”

“Shapiro’s!  They’re still around?  I remember getting stuff there when I was a little boy for special occasions.”

So I had to take CVH there.  We walked in, and most of the steam table items were already out, so it smelled magical.  They don’t have the cheapest items in town there, but you’ll have great trouble finding any higher quality.  We ordered a couple of stuffed cabbage rolls, some peppered beef, a couple of slices of coconut cream pie, a bagel, and two chocolate eclairs.  The poor fellow behind the deli counter, however, was not having a good day and could not get our order rung up properly to save himself.  He eventually closed the ticket and quoted me a price.  He showed me the receipt and said don’t worry about it not matching, I credited you for where I overcharged, and you really came out ahead.  He was a big guy and I didn’t want to start any trouble (or get him into trouble) and the price he quoted seemed reasonable, so I just paid it.  On the way out I mentioned that we were from Louisville, and he assured me that we couldn’t get anything this good in Louisville.  It wasn’t until we got back home and unpacked the bag that he loaded for us that we discovered that his price was much more than reasonable.  If they don’t get that guy off the register, they may be out of business by next week.

Tuesday 1130: This time I take the bypass, avoid all construction, and we’re home in less than two hours.