The customer is always right, but that doesn’t mean we have to do something about it 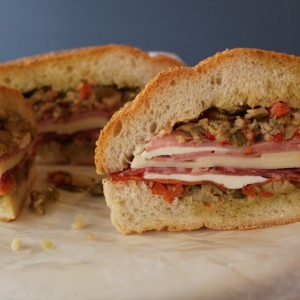 A beautiful spring day today!  The sun was shining so bright that you got hungry just looking out the window.  And as fortune would have it, a local restaurant, Roux, was having their New Orleans festival today.  Their tagline is We Are New Orleans.

I regret to report that They Are Not New Orleans.

We were seated in the dining room, which, like so many restaurants in Louisville, was converted from an old residential house.  There were beads and masks on the table, a cheesy touch.  But the staff were very pleasant and friendly, and there was, as promised, a jazz trio.  CVH was excited by all the authentic-sounding items on the menu.  She and her mom finally decided to share the catfish coubillon, charbroiled oysters, and a side of potatoes.  “And then beignets for dessert,” she declared.  I ordered the muffaletta.

A dark cloud passed briefly over our table as the waitress placed a bottle of Crystal hot sauce down.  Now, Crystal is not inauthentic (it comes from Metarie); but it is a blend of whatever they can get on the market, such as off-test Tabasco.  In hindsight, this was our first sign that things were not going to go as planned.

After a bit of a wait, the coubillon came out.  The egg was nicely done, and the okra were delicious.  But the raison d’être of catfish coubillon is the catfish.  This catfish had been thinly shaved and then deep fried.  It came out like a catfish-flavored chip instead of catfish.

The potatoes were disappointing, also.  Perhaps we just misread the menu, but we were expecting New Orleans style boiled potatoes.  What we received were rather pedestrian, with none of the standard seasoning.

The charbroiled oysters were not charbroiled at all, but appeared to have merely been placed under a broiler or salamander.

Then the “muffaletta” showed up.  It consisted of a roll of absolutely top-notch bread and filled with quality meats.  However, a ham sandwich does not a muffaletta make.  It requires prodigious amounts of New Orleans Gambino’s olive salad.  This sandwich had about a teaspoon of black olive tapenade.  I mentioned to the waitress that the sandwich was lacking in olive salad, and could I please have a side order of same.  “Yes,” she replied, and went off to the kitchen.  Alas, the response from the kitchen was No.

The muffaletta did come with a bag of Zapp’s chips, which was the most authentic part of the whole meal.

By this point, CVH ruled out ordering any beignets, fearful of what might be delivered.

She stopped at Lotsa Pasta that afternoon, where they make their own muffaletta olive salad, and got some.  We added it to the sandwich for dinner, and it was good.

This entry was posted in Food & Eats. Bookmark the permalink.