Last weekend we visited the grand estate of George Vanderbilt, Biltmore.  I probably would have enjoyed the trip more if I hadn’t been suffering the allergy attack from hell.

We got up extra early on Thursday to catch the tour bus.  The pickup point was not in what you would call the best part of town; I cleared out the car and hoped that it would still be there when we returned.

We settled into our seats, which were more comfortable than airplane seats and had a lot more room.  A lot more.  However, the driver then had to fight his way through rush hour traffic to pick up some more passengers with the upshot that after an hour on the bus we were right back where we started.  Live and learn.  Next time we will sleep in an extra hour and then drive to the last pick up stop.

The ride to North Carolina was fine.  All the passengers were grey-hairs, except for one young woman who was traveling with her mother-in-law.  The bus stopped frequently for us to stretch our legs.  At one stop, I talked with a couple of guys who had just pulled a 1936 Silver King tractor out of a ditch and were taking it home to restore.  It looked like they really had their work cut out for them.

Biltmore, if you’ve never been there, is a staggering 250 room mansion built at the turn of the twentieth century by a grandson of Cornelius Vanderbilt, a famous nineteenth century robber baron.  This grandson, George, had inherited enough money to do anything that he wanted, and what he wanted to do was read books, travel, entertain, and build the most impressive mansion imaginable to go along with those activities.

And truly, the house and gardens are magnificent.  He hired the greatest house and landscape architects available, and the results show.  I particularly like the way the grand staircase and wintergarden asymmetrically flank the main entrance.  And the banquet hall with the triple fireplace and seventy-foot ceiling was a nice touch: 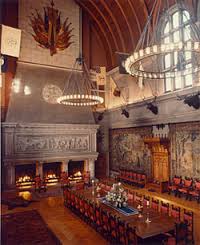 A wintergarden is always a nice touch above the thirty-fifth parallel, but we didn’t get to see much of it, as something had crashed through the glass roof the day before and they were busy making repairs.

But as we went through the rooms, looking at all the old tapestries and European-influenced interior design, I couldn’t help but be struck by the contrast between what was going on here and at the World Columbian Exhibition, which was built at about the same time.  We had seen a special exhibit at the Field Museum on the Columbian Exhibition.  The World Columbian was open to all; it showed the wonders of all corners of the current world, and the promise of the wonders of the future.  Biltmore was only available to a select few, and although George had a very inquiring mind (the libraries in Biltmore contain about 23,000 volumes), you get the feeling that there really isn’t much original here.  I suppose this is what is meant by the “Gilded Age”. 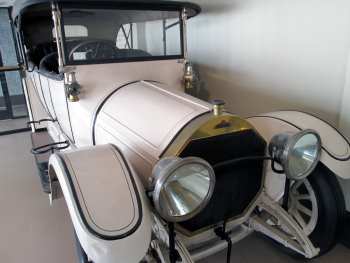 They did have a nice old car.  I like the kerosene back-up headlights in case the electric ones don’t work. 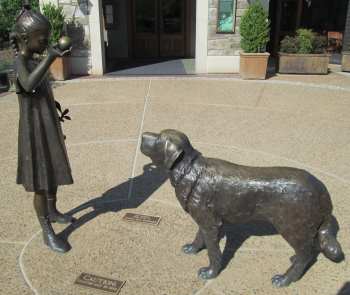 There was a nice fountain. All of the coins thrown into the fountain are donated to the local humane society in the name of George’s beloved Saint Bernard, Cedic, shown here playing with George’s daughter.

The azaleas (or rhododendrons or whatever they are up here) were in full bloom.  There is an entire azalea garden which we toured. 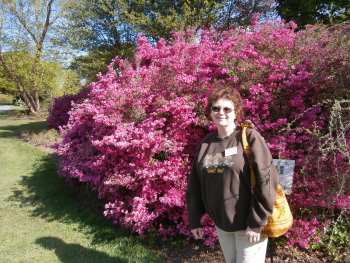 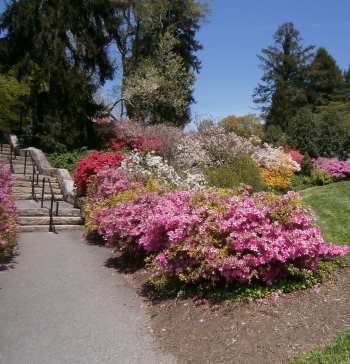 As I mentioned, though, I was sick as a dog that day, so halfway through the garden I had to lie down for some rest. 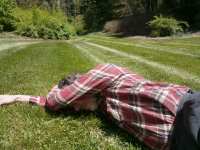 I’m sure George would have been appalled at some commoner passed out on his Frederic Law Olmsted-designed garden. 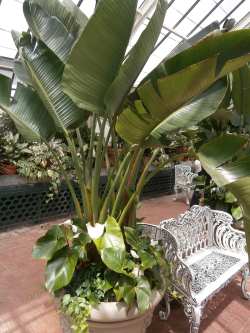 I’m afraid my final take on the whole estate was that it was too extravagant; it just didn’t seem right that one man could do this without producing anything himself.  I found Biltmore to be a excellent argument for at least some sort of estate tax.

Saturday dawned cloudy for our ride home, but we were lucky in that we had seats in the front of the bus so that we could watch the Smokies and Blue Ridge mountains pass by.  Halfway into the morning, though, we stopped at the outlet mall for two hours.  Two hours! I thought; we could get home that much sooner.  The tour director pointed out that although most men don’t like to stop at the mall, it is on the itinerary.  Also, being a flower and garden tour, women outnumbered men about three to one.  Maybe four to one.  But the joke was on me; CVH and I came back loaded to the gills with purchases.  We were grabbing other people’s overhead bins right and left to stow all our stuff.

Then we went down the road about fifteen minutes and stopped again, this time at a Russell Stover outlet store.  Now what? I thought.  Well, we needed to get something to bring home to mama, so we went inside and found a nice box of chocolates.  Then we noticed everyone had gravitated to the back of the store.  We followed out of curiosity and found this is where Russell Stover sells their seconds; that is, chocolates that taste perfectly fine, but have cosmetic problems that prevented them from making it into one of their fancy boxes.  They take about five pounds of these seconds and throw them in a box and sell them for three dollars.  Anyway, we finally got out of there carrying about twenty pounds of chocolate, including the nice little box they threw in at the cash register for being such good customers.

And the car was just fine when we got back.