The old sick cat died, and we decided now was a good time to get rid of the first floor carpet, along with its ten years of accumulated pet vomit, urine, and feces. We went down to a floor covering firm that has been in town for many years and picked out a new vinyl floor. $3500.

Then we moved everything from the first floor to the second floor, meaning that we were living out of the master and guest bedrooms. But that was OK, we told ourselves; it will only be for five days. (Cue Gilligan’s Island theme song here.)

Monday comes, the floor crew shows up, lifts up one corner of the carpet, and says they can’t tear out the old floor. They leave after fifteen minutes, having done nothing.

I call the remodeling contractor down the street. He, unusually, is at home. Apparently the job he had scheduled for the day was cancelled. He thinks the flooring contractors are full of it; he thinks they just underbid the job. Since his crew is idle, they’ll come right down. They took everything out. $350 (i.e., an extra 10%).

I call the floor company back and tell them I removed all the old flooring. They say they can schedule another crew in a week. In the meantime, we look around the room. The large mirror had fallen off the wall and crashed last year, right behind me while I was watching TV (I thought I was going to do a David Warner) 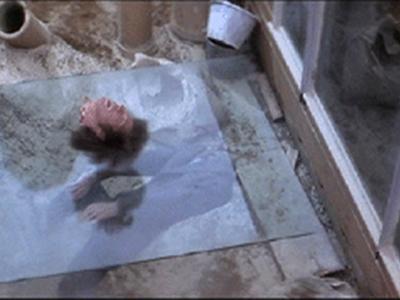 leaving a big splotch of old color. In addition to all the other wall dings and scratches that accumulate over time. So we decided now’s a good time to paint. Wouldn’t have to worry about dripping on the floor, anyway. But the wife doesn’t want to have anything to do with painting, and I’m getting too old to do an entire floor by myself, so we hire a contractor. They do a better job than I would have, they work through the weekend, and it’s done in time for the floor contractors to return on Monday. $2200.

Our instructions from the floor company dispatcher were to move all small items out of the room, but their crew would move furniture. Monday the floor truck shows up with one man. “Do you have guys to move all this furniture?” he asks. He’s here five minutes and then he’s gone.

Oh, and don’t forget about the running bill for the kennel fees for our other pets everyday something is scheduled.

Call the dispatcher back. He’ll send out a large crew on Wednesday. Wednesday comes, a large crew shows up, and moves the furniture out into the driveway. Then it rains. Still, they get the job done in one day, which concerns me a little, since I was originally told it would take two days, to allow for adhesives, etc, to cure properly. The next day, Charlaine gets out the vacuum cleaner to sweep up the mess from the installation and it sucks up the vinyl off the floor. I call the floor company. “No, it’s not supposed to do that,” I am told. “We will send someone out next week.” In the meantime, of course, we still can’t move anything back downstairs. We’re going on three weeks of this and my wife is about to lose her mind.

To try and make her feel a little better, I suggest we go ahead and replace the old vanity in the downstairs half-bath. It looked very, very 1968. It was time. It was a little 24-incher; you couldn’t put a big vanity in there or you couldn’t open and close the door. But I measured, and there was room for a thirty inch vanity; the door would still open all the way and you wouldn’t bang your knees when you sat on the commode. I told CVH that would give her more under-counter storage for all the cleaning supplies she likes to keep down there. (Are you seeing where this story is going?)

So we go over to Lowe’s. They have a real nice 30 inch vanity. $500. Ouch. We look at another one, which is nowhere near as nice looking, but is $300. And they have a 24 inch vanity, which doesn’t look any worse than the $300 one, but is only $200. CVH decides the extra space is not worth $100, so we get the 24 incher, even though we could have gone larger. Getting it into the car is another story; I still forget I don’t have a pickup anymore; but we got it home.

This morning, I get up and go to take the old vanity out. As I am wiggling it out the door, I discover the real reason they put a 24 incher in there – the door is only 19 inches wide. Although a 30 inch vanity would fit in the interior space, it would be too deep to get through the door. Geez, I think: that was a close one.

My wife helps me get the old vanity out of the house and the new one in. We take the new one out of the box. She looks at the hardware I took off the old one.

“This looks like it should be pretty easy,” she says.

“You’ve never done this before?”, she asks, with that tone in her voice.

“I read the article in Family Handyman.” 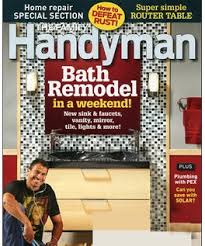 “You’ve never done this before,” with that other tone she uses.

This afternoon I received a message from the salesperson at the flooring store. They want me to pay the balance due on my account. OK, but they are now trying to charge me extra for the additional hassle they had to go through. They are not going to get a good review on Yelp.

This entry was posted in News from Louisville, The Modern Condition. Bookmark the permalink.