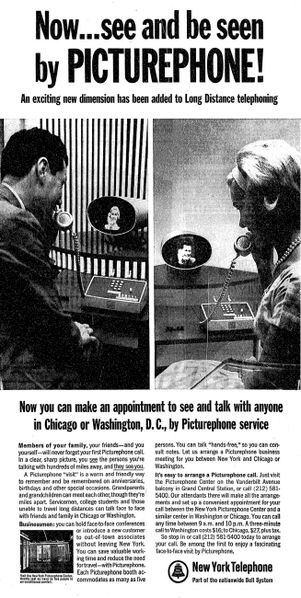 About fifty years ago, I made my first picturephone call.  My grandmother took me to the Prudential building in downtown Chicago, where Bell had a demo system set up. (You can see a picture of what the Pru looked like then.)  I stood in a line until I was able to speak with another kid who had stood in a similar line in New York.  There was no cost for this – they could hardly charge you for the privilege of speaking to a stranger for sixty seconds – but if you wanted to, you could arrange your own private call for the astronomical price of nine dollars a minute, plus tax (equivalent to about sixty-eight dollars a minute today).

Thanksgiving morning we spoke with and saw our son in Afghanistan from the comfort of our own home using Viber.  The picture broke up a few times, but hey, it was all the way to Afghanistan.  It was pretty amazing, although if I had been charged two thousand dollars for the call then I would not have thought it that amazing, rather about what I would expect for $2000.  The amazing thing is that I was able to make the call and it was already included in my monthly phone bill.

This entry was posted in The Modern Condition, Things you may find interesting. Bookmark the permalink.